Archive
These recordings were done on my new Alhambra 50th Anniversary Ziricote guitar. I got it from GuitarsOnline, which is based in Melbourne, Australia. I feel as though Spanish music fits so naturally on a Spanish made guitar!
Click here to read more about the guitar
Preface (translated from German)
The homeland of the guitar is Spain. From there she began her triumphal march through Europe. Originally double-strung like her relative, the lute, she later adopted the simple single stringing, as we know her in today's instruments. Her classical literature and playing technique received the guitar at the beginning of the last century by Ferdinand Sor (1770-1889). Until 1840, the guitar in Germany was the most popular house instrument, and then the piano gradually took over this position.

Different to Spain, here (in Germany) the guitar remained the popular and appreciated national instrument of all the virtuosos and lovers of a well-groomed culture, whose artistic maturity was seen in Baldomero Zapater. In her hands, the guitar sings and springs like a stringed instrument and develops a richness of timbres, produced first and foremost by very careful right hand fingerings, making the most efficient use of all the strings and registers, and projecting a violinistic melodiousness out of the instrument through artful phrasing. A never-ending tradition has purposefully expanded the work of Sor and Aguado in Spain. Generation followed generation, further expanding the culture until it culminated in Francisco Tarrega.

Making this connection from Sor's classic style of playing to Spain's modern guitar playing is the purpose of this collection, which at the same time acquaints the guitarist with performance virtuosi and for the first time associates it together in an album.

The publisher spared neither time nor effort during his travels in Spain to ascertain the sources or first editions. He owes his special thanks to his Spanish friends, the guitarist Emilio Pujol in Paris and the director of the music department of the Instituto Catalan, Dr. Angeles. 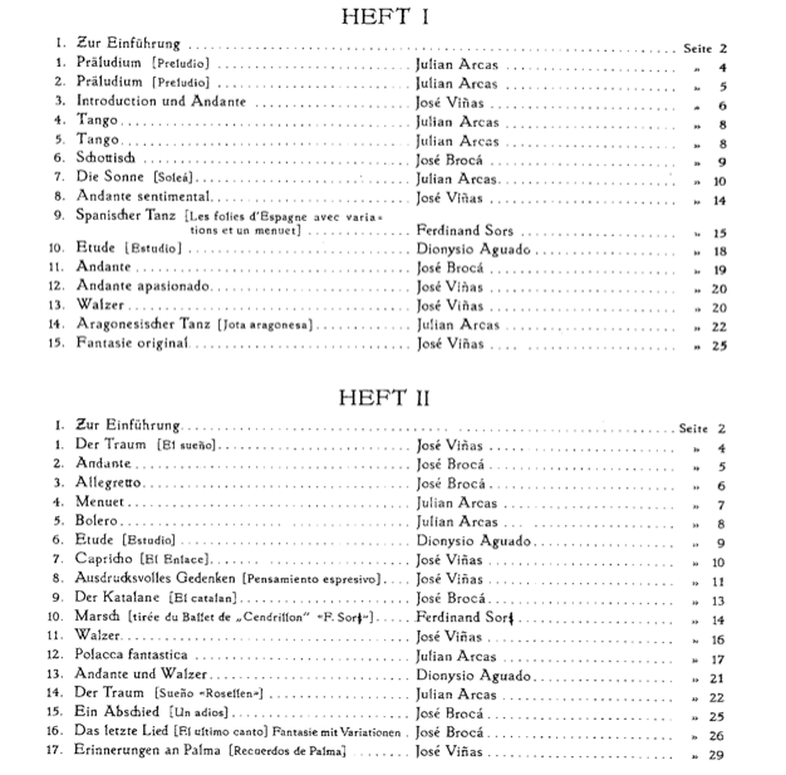 Although Jose Broca dedicated himself completely to the guitar, Vinas, thanks to his extraordinary musical talent, was also a singer and composer- and, above all, a conductor at a great variety of theaters in Spain- in addition to his career as a guitarist.

Together with Julian Arcas, Vinas is esteemed as one of his age’s most significant guitar virtuosos. His interpretation of the works of Aguado and Broca were considered to be exemplary, and he appeared as a guest performer in a number of European countries with much success in 1844. The home residence in Barcelona increasingly became the meeting place for both local guitarists and those giving guest performances. Here they met, talked, played for and listened to each other. This is where the young Fracisco Tarrega presumably also introduced his first works.

Vinas' altogether ambitious compositions demonstrate that they are completely rooted in the dance forms typical of those times: polka and mazurka, waltz and tango are his favorite forms. In addition to these, the fantasias are of equal importance."

- From the booklet of: Joachim Gassmann: La Leona, Spanische Gitarrenmusik des 19. Jahrhunderts, Amb 97964, contributed by Norbert Fischer of Germany.
Information taken from: ﻿http://www.earlyromanticguitar.com/erg/composers.htm#vinas
Jose Broca (1805-1882)
"Jose Broca was a Spanish composer, 1805 - 1882. According to Fred Noad, Broca was a student of Aguado but mostly self-taught. He was established in Barcelona and renown for his playing of works by Sor and Aguado. He was a friend of Julian Arcas and the teacher of Jose Ferrer. Broca's works are elegant pieces in a similar style to Tarrega, but written much earlier."
Information taken from: http://www.earlyromanticguitar.com/erg/composers.htm#broca

"José Brocá y Codina (in Catalan: Antoni Josep Mateu Brocà i Codina) (21 September 1805 – 3 February 1882) was a Spanish guitarist and composer of the Romantic period. Brocá was born in Reus, province of Tarragona. Mainly self-taught on the guitar, he also studied briefly with Dionisio Aguado. He was reputed to have been an excellent performer on his instrument. As a teacher based in Barcelona, his best-known pupils included Felipe Pedrell and José Ferrer who both dedicated compositions to him (and vice versa). He was a friend to Julián Arcas. In his teaching, Brocá used Aguado's method. Brocá died in Barcelona. Brocá composed around twenty works for the guitar; Bone (1914/54) singles out his opus 19 (Fantasia and Tone Poem) as his 'principal guitar composition'. Brocá's music was praised for its elegance and its stylistic proximity to Tárrega's, despite being several decades older."
--- Information taken from: http://www.free-scores.com/Download-PDF-Sheet-Music-jose-broca.htm#
Julian Arcas
"Julián Arcas was born in Almería, Spain in 1832. He is remembered as having taught that other Master Spanish guitarist Francisco Tárrega. He was schooled in the methods of Dionisio Aguado, first by his father Juan Pedro Arcas Arjona and later after moving to Mága, by Josésencio. Arcas was also accomplished in the playing of guitar in the Flamenco style.

Little is known of his early years , certainly he was an accomplished performer by his late twenties and had concertized throughout central Europe and Spain since the age of 16 years. In 1862 he performed before members of the British royal family in the Brighton pavilion, and in the palaces of the Duke of Wellington and the Duke of Cambridge . Also notable was a series of seven recitals at the Teatro del Recreo in Mága in 1870. Part of his tours included an association with a pianist, Patanas, with whom he was living in Barcelona.

After a concert In Castellón, 1862 a young Francisco Tárrega played for Arcas, at the request of his father. Subsequently Tárrega was invited to study with him in Barcelona. Julian Arcas contributed to the evolution of the classical guitar through his association Antonio de Torres, particularly with regard to the design of the soundboard. Torres had first encountered Arcas in Seville, the two were both from Almería, Torres only made guitars as something of a hobby at this time. After Arcas played one of his guitars he found it to be so harmonious that he encouraged Torres to become a more serious luthier. Julian Arcas continued to use these guitars for the rest of his life, and eventually Antonio de Torres would be renowned as a master luthier. Arcas was also was one of the pioneers in the use of the rest-stroke on the classical guitar."
Information taken from: http://www.maestros-of-the-guitar.com/julianarcas.html
Highlights from Vol. 1
Introduction and Andante by Viñas
I really admire the compositional craft of this short work. The opening melody serves as a motif that is repeated in many different guises throughout the piece. The contrasts of each section are remarkable, including a bold and powerful opening, sweet and lyrical Andante melody and brilliant passagework in the final section.
Andante apasionado and Waltz by Viñas
The editor has suggested to play the Waltz straight after the Andante (anschließend Walzer). This creates a great pair of pieces, as you begin with a charmingly lyrical piece and conclude with a lively waltz.
Fantasie Original by Viñas
Probably my favorite piece in the whole book! The introduction is fiery and bold, followed by a scherzo-like section full of rhythmic vitality. Of course, the icing on the cake is the gorgeous tremolo section.
Tango by Arcas 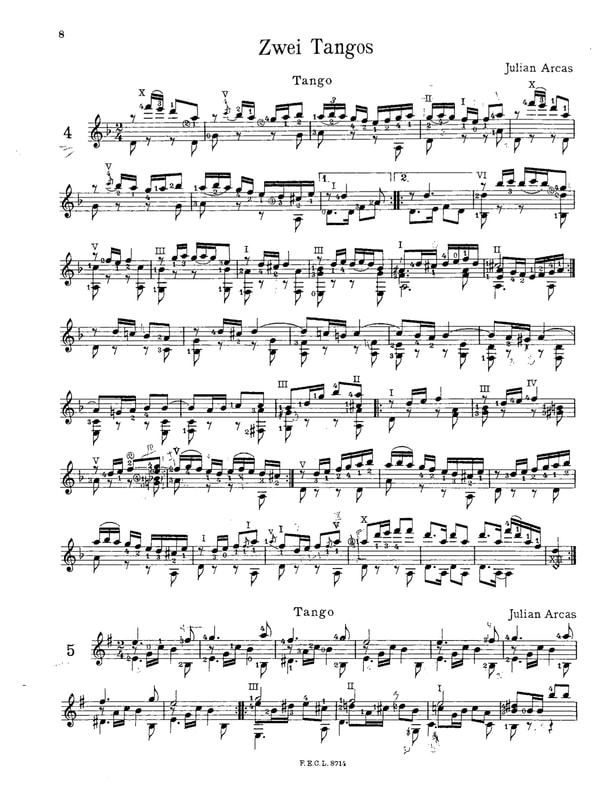 An evocative and lyrical tango that is a bit more on the less demanding side in terms of difficulty. I love the sequences that Arcas uses.
Highlights from Vol. 2
El Sueño - Viñas 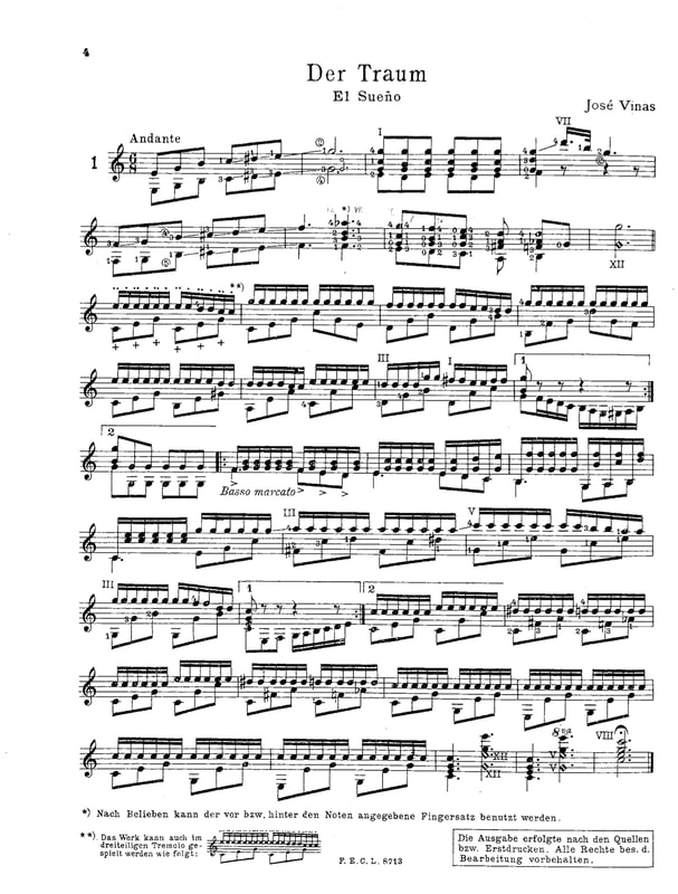 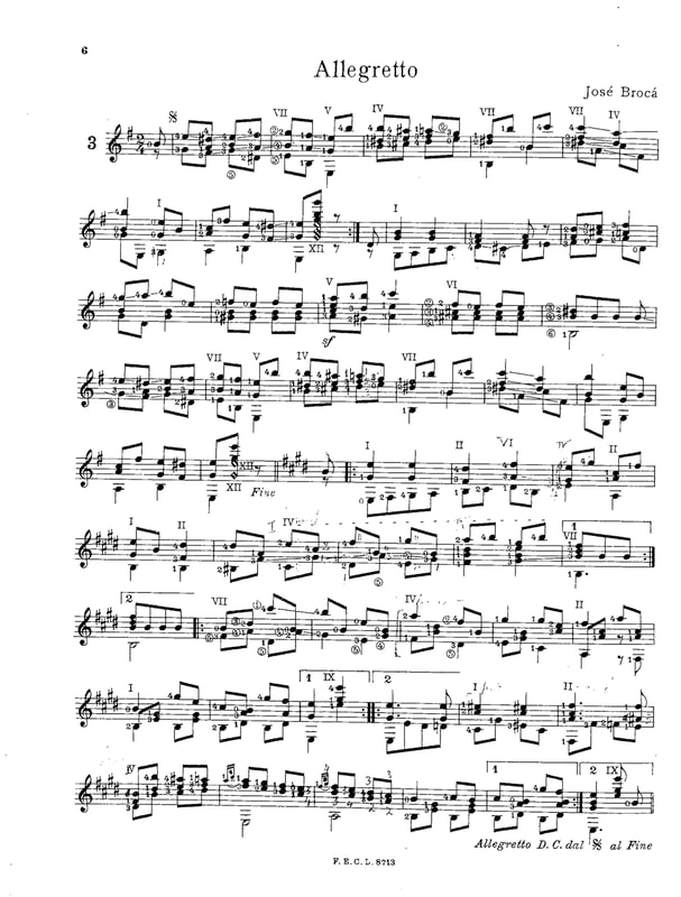