DANIEL NISTICO
Thanks for coming to

Giovanni and Daniel
La Vida Breve from The Three Cornered Hat by Manuel de Falla
Download the program here
One of the pieces we performed at Noche Espanola
About the Performers
Two internationally acclaimed guitarists combine to play an exciting program of Spanish guitar music! 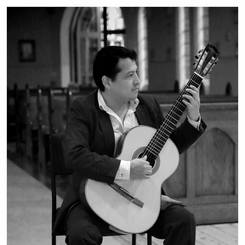 Giovanni Riveros Lopez
Giovanni was born in Lima, Peru. He studied classical guitar at the "Higher Conservatory of Rostock" in Germany and completed his studies at the "Liceu Conservatory" of Barcelona in Spain.

In 2009 Riveros recorded his first album with the ‘Duo Encuentro’ (Cello and Guitar) and in 2010 carried out a tour of concerts and master classes in Peru under the coordination of the Superior Conservatory of Lima "Josefat Roel Pineda". In 2015 Giovanni released his second album ‘Duo Matizes’ (Flute and Guitar) with the professor of the Seville conservatory, Guiomar Espiñeira, with whom he offered several concerts in Germany. 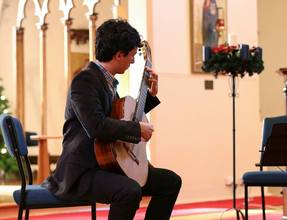 Daniel Nistico
Daniel has captivated audiences in Chile, Serbia, New Zealand, China, the USA, and the Czech Republic. He has won prizes at national and international competitions, including the Lions Club Global Youth Music Competition and The World Competition.

Daniel has performed at prestigious venues across Australia including ABC’s Iwaki Auditorium, Arts Centre Melbourne, High Court of Australia and Brisbane City Hall. He was broadcast on ABC Classic FM’s ‘Rising Stars’ segment (hosted by Graham Abbott) and has also been featured on 3MBS Fine Music Radio and SBS Radio.

Daniel recently completed a Doctor of Musical Arts degree (abd) at the Eastman School of Music, one of the USA’s leading music institutions. There he studied with Nicholas Goluses and Grammy-award winning artist Paul O’Dette, one of the world’s leading early music specialists. Daniel was the first guitarist in the school’s 94 year history to be nominated for an Artist Certificate award, which acknowledges performance standards of the highest quality. Daniel completed his Master of Music at the Melbourne Conservatorium of Music, and received his Bachelor of Music with Honours from the Victorian College of the Arts. During this time, Daniel studied with Aria-award winning guitarist Tonié Field and internationally renowned pianist Dr. Donna Coleman.
Some Highlights From The Program
Vicente Asencio - Collectici intim
A very fun and exciting piece to perform! There are five movements that portray vividly contrasting moods:
Serenity
Joy
Calm
Delight
Haste
Isaac Albeniz - Sevilla
Although Albeniz composed for the piano, the pure Spanishness of his music makes his pieces a great fit for the guitar.

I like to think of the two contrasting sections of Sevilla as day (fast and energetic) and night (slow and lyrical). The work draws inspiration from both the town of Seville and the Sevillanas dance.
The Venue
St Bartholomew's Church is a beautiful space to hear music in. It's located close to Burnley station, just a few clicks away from the CBD of Melbourne.
My New Spanish Guitar
I recently got my hands on a new guitar that was handcrafted in Spain. This instrument's fiery, raw, mysterious and rustic tone evokes Spain. Take a listen and admire its workmanship below. Come experience it at the concert!