Archive
1. Sidney Pratten's Guitar School (c. 1859)
Download Pratten's Method Book Here
I found this guitar method back when I was writing a paper for my Doctorate degree. I literally stumbled on it, and after skimming through I was astonished at the amount of great info that it contains.

Catharina Josepha Pratten (1821 - 1895), a.k.a. Sidney Pratten was one of the most renowned guitarists of her day. She was a child prodigy, and was taught by her father Ferdinand Pelzer (who also wrote some method books, two of which you'll get in the coming weeks). Pratten was friends with Giulio Regondi, whom she played guitar duets with. She also often accompanied Regondi's Concertina playing.

Catharina married a flute player named Robert Sidney Pratten (hence her use of the pseudonym Sidney). Catharina was a fairly prolific composer, and also wrote several method books, though I've only come across the one so far. In the future, I will send you the pieces I've found by Pratten - they're not super easy to find. 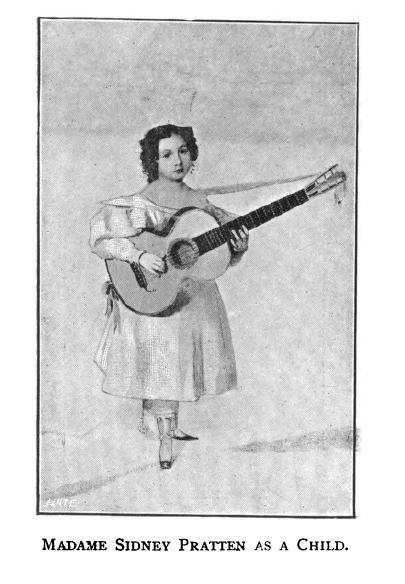 If you want to read more details about Pratten, I recommend the following sources. The first is a wonderful biography of around 120 pages, and the second is the best website on Pratten that I've found so far -

http://archlute.com/wordpress/?p=332
Guitar School
This is a beautiful method book that is full of wonderful information, pieces, and exercises. Many songs are given throughout with the guitar used as an accompaniment. It seems that guitarists probably sung and played, as can also be testified by a review of Legnani playing a concert, in which he was described to be singing - "Even as a singer 'alla camera' he showed taste and the inborn, lovely presentation found in his fatherland, plus, the rich and (incredibly) shining accompaniment provided doubled interest."

If you play through the entire method, you will certainly gain some new skills in harmony and ornamentation.
Most of the little pieces are really delightful, and would be great to see performed more often. 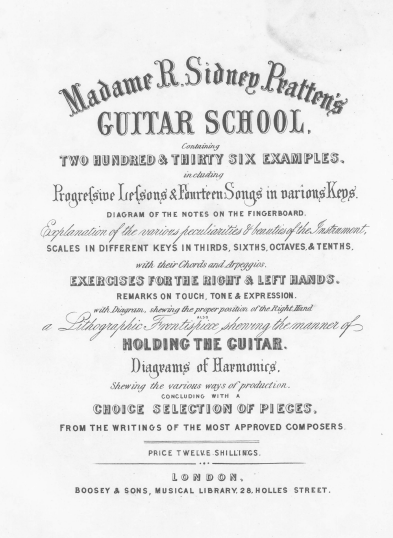 Highlights
The method begins with some basic information about the guitar - it's qualities, tuning, techniques (or "peculiarities" as she calls them), a diagram of the notes on the fretboard, and some remarks on posture (pages 1-7).

Pratten describes the guitar's qualities in entertaining detail, for example "although it has not the power of some large instruments, it has a revenge in its delicate and sympathetic tones."

It's interesting to note that Pratten provides a sign for using vibrato!

A wonderful image of the fretboard is given. Most 19th century method books I've encountered so far have some kind of similar diagram. 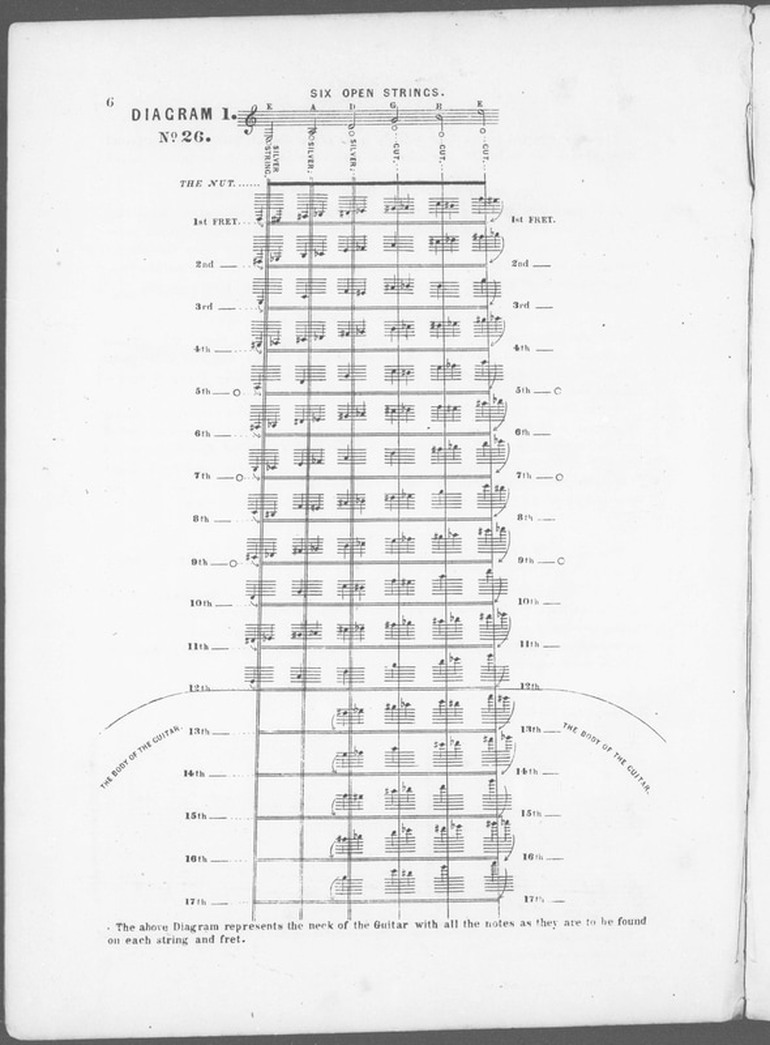 The next section (starting page 8) provides scales, exercises, songs, and pieces in given keys, starting with C major and going up the circle of fifths. It does this first in the major keys, and then the minor keys begin at page 32. Now of course, not all major and minor keys are presented - only the ones that fit well on the guitar. This format seems to be quite common in 19th century guitar methods.
Basic cadence patterns in many keys are also included in this section. They are great to learn as they so often appear at the ends of phrases. This can help you to learn pieces and sightread much faster.

I - V - I - IV - vi/V - I6/4 - V7 - I
What I'm about to highlight next is perhaps some of the most important information I've found in any 19th century method book.
Pratten provides a diagram that shows the plucking regions of the right hand and their effect. She then shows us how she would have applied these plucking regions to a passage of music. Read it carefully and think about how you can apply the information - this information is crucial for understanding the performance practice of 19th century guitarists - they weren't playing in a mono colour, but rather the opposite! 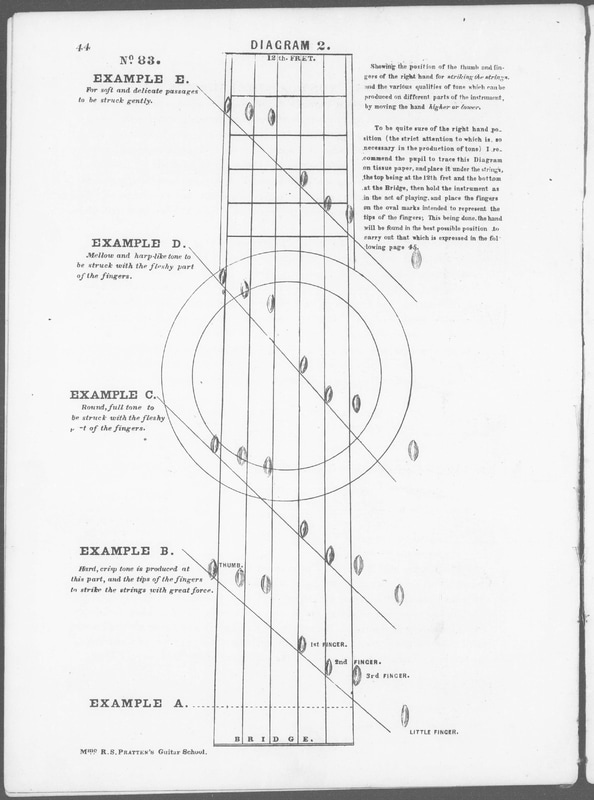 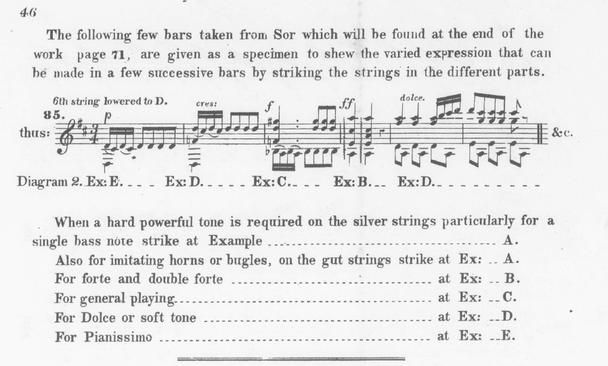 Towards the start of the book, Pratten describes one effect for imitating horns (corni) 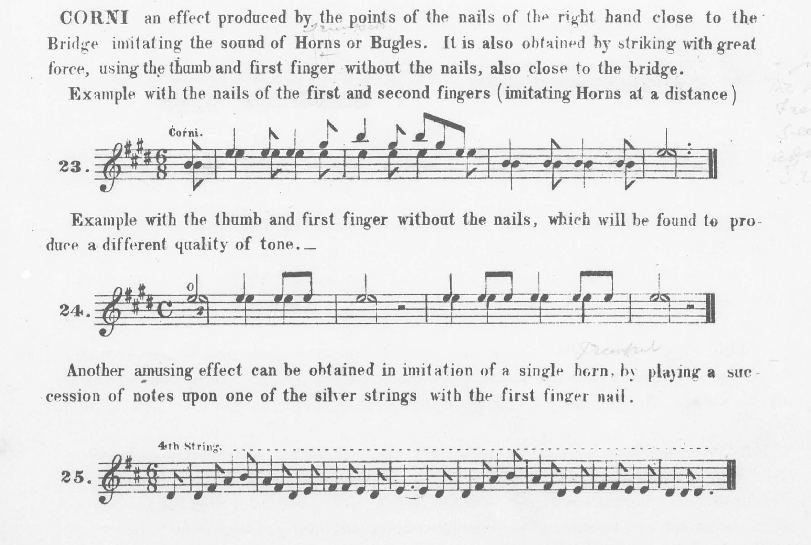 Some wonderful right hand arpeggio exercises follow on page 46 - very refreshing if you've only played Giuliani's 120 right hand studies!
Below is just an excerpt of this section: 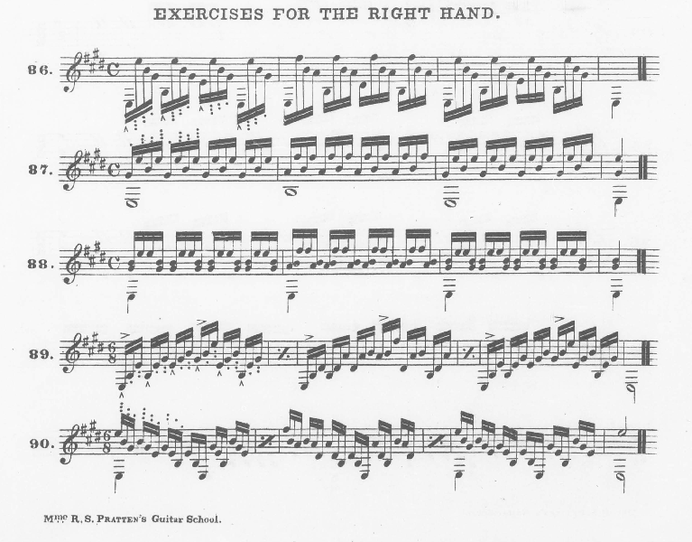 Next come some left hand exercises, with various forms of slurring. One of these exercises is a double slur, and I haven't seen the likes of it other than in Carlevaro's Series Didactica Para Guitarra, written over 100 years later! 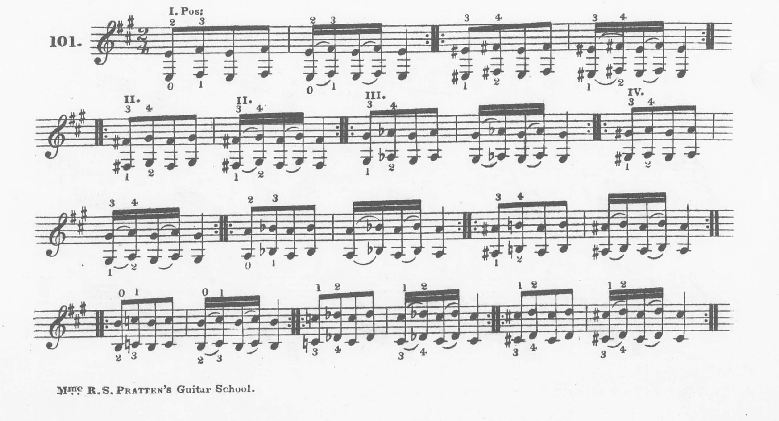 Next comes an exercises for the glissé in the form of a Mazurka - one of my personal favorite pieces in the book! 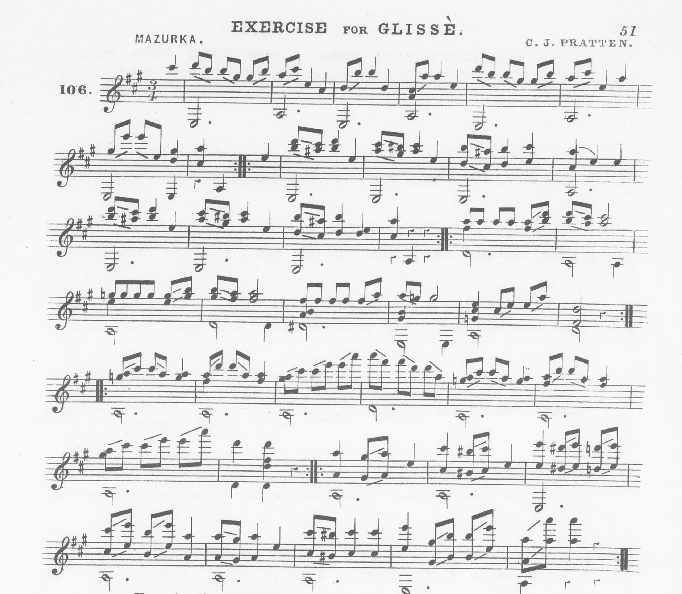 If you need to work on your fretboard knowledge, then the next section will be a treat for you! It gives exercises in various positions - scales, chords and arpeggios in a variety of forms and positions. A must for any guitarist wanting to improve their understanding of harmony on the guitar. 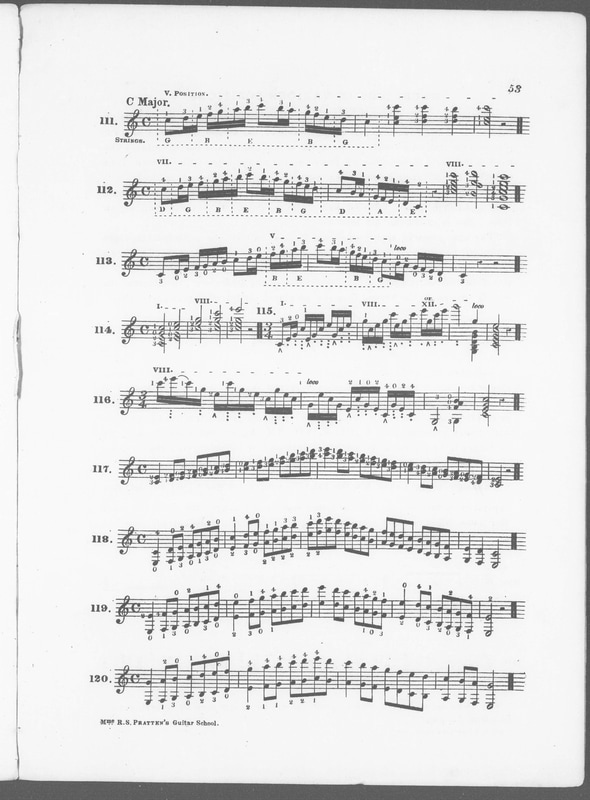 The final section of the book, starting page 70, gives a selection of pieces. Composers include well-known ones such as Sor, Giuliani, and Legnani. However, Pratten includes some lovely short pieces too.

One of my favorites is a theme and variation on God Save the Queen, by Kreutzer. 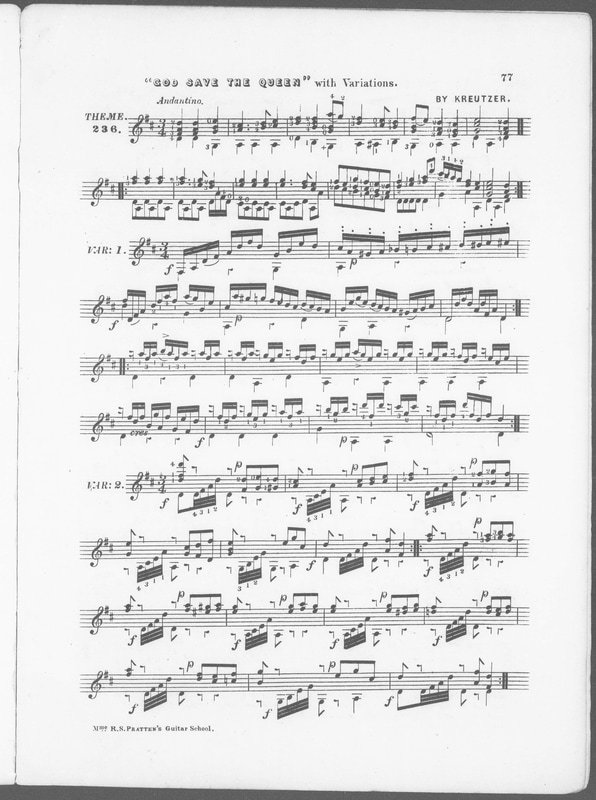