Archive
Highlights
Chapter 1
"The mediocre players that I had heard, showed the defects of the guitar in an intensified degree. I knew, however, that all instruments have their defects, and that it is the artiste who overcomes, or at least, subdues, them."

There is so much truth and substance to these words! The guitar is an instrument full of defects - too soft, too staccato, cumbersome left hand movements, string squeaks- the list could go on. But we can learn to tame the beast and subdue these defects, perhaps even transforming some of them into positive qualities. Pratten did say that "the guitar has a revenge in its delicate sweetness", the general staccato nature of the guitar can have sublime effects as seen in tremolo, and the cumbersome left hand movements can be turned into graceful choreography that is entertaining to watch. One aspect of technique could be to overcome the defects of the instrument.

"The infant prodigies - Catharina Pelzer and Giulio Regondi - had met, and were brought out together. Such diminutive performers were "lost" on a large platform; so, to be seen as well as heard, they were mounted upon a table. Madame Pratten often used to speak of these days when she played duets with Regondi, whose abilities she always highly praised."

Well if you need some proof of just how skilled of a guitarist Pratten must have been, then her pairing with the great Regondi gives a pretty compelling case! Check out the image below of the infant Pratten - did she always stand using a strap when performing? Why are classical guitarists today (including myself) so opposed to standing and using straps? Notice the beautiful positioning of both of her hands 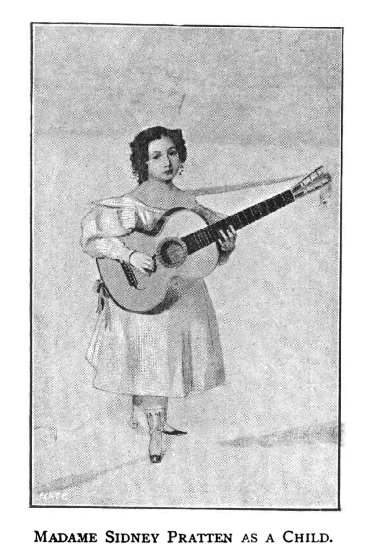 "I cannot refrain from quoting the following extracts from contemporary critiques: "The interesting little beneficiare astonished her hearers by her wonderful performances upon the guitar ... produced effects from the guitar, of which we had no previous conception it was capable". Another says: "She played three brilliant pieces, accompanied by her father, to the general admiration of the company assembled. Her touch is powerful, and her execution wonderful; we were surprised how such tiny fingers could draw forth such perfect sounds from an instrument requiring some strength to make it discourse 'eloquent music'.' In a very few years we doubt not to see this interesting child at the head of her profession."

After reading through Pratten's Guitar School, I think the comment on her producing effects literally meant that she created vivid effects on the guitar. Such effects might have included:
- Imitating orchestral instruments
- Various kinds of strumming
- Frequent changes of tone color
- Heavy and frequent use of vibrato
- Elaborate ornamentation
- Percussion effects

"Although possessing a fertile brain, little Fraulein Pelzer did not enjoy close book study. She disliked her harmony lessons. The matter-of-fact solutions of figured-bass problems were uncongenial to her poetic mind and imagination."

How many students of music must have sat through harmony classes or read through harmony books, only to have suffered through dry explanations of some truly magical musical phenomena! Study the pieces you are playing and you can learn everything you need about theory, harmony, and so on.
Chapter 2
"I believe that no one has done more to further artistic attainments than has Madame Sidney Pratten. I have known the effects of her influence upon crude subjects - in whom she saw scope for development - minds which have appeared insensible to that delicacy and refinement which constitute art"

"Her environments considerably influenced her in her art. I have known her to be unable to play when facing an ill-shaped piece of furniture; so sensitive was her mind." 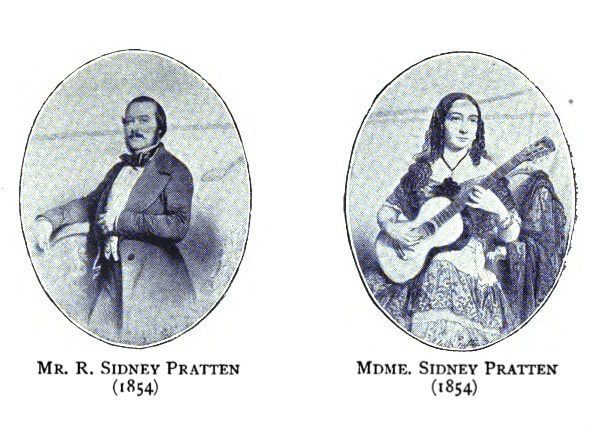 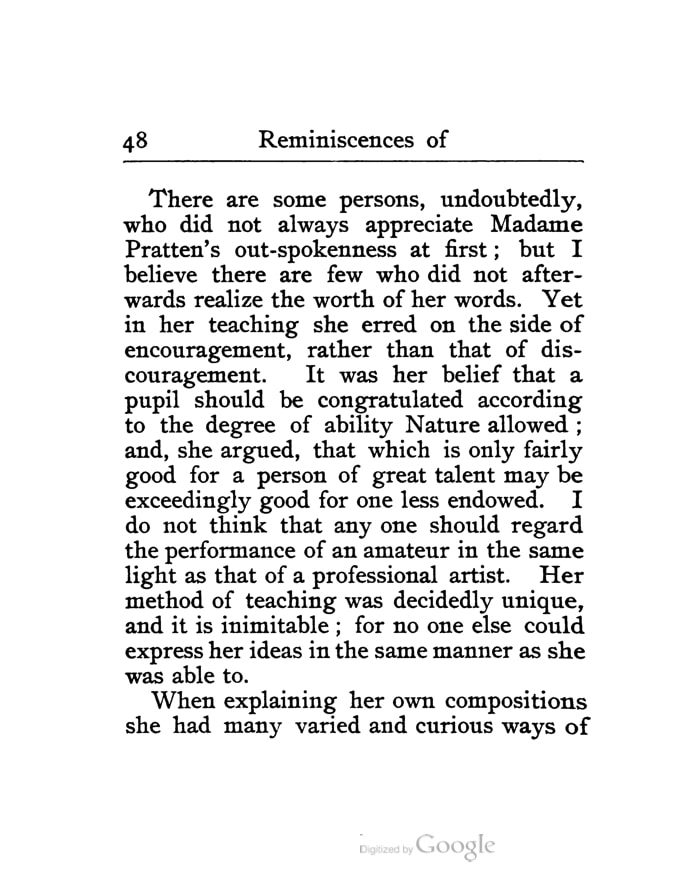 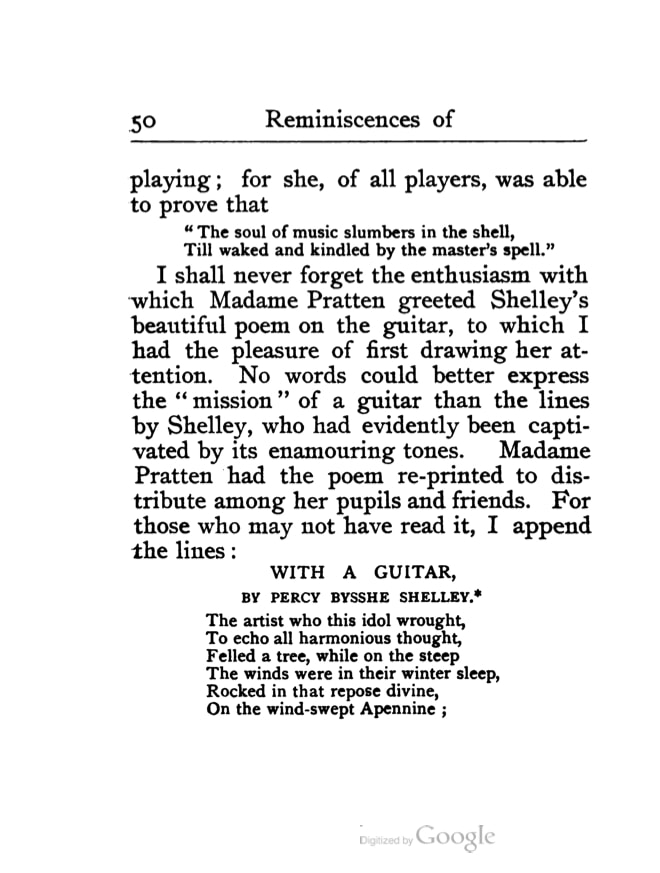 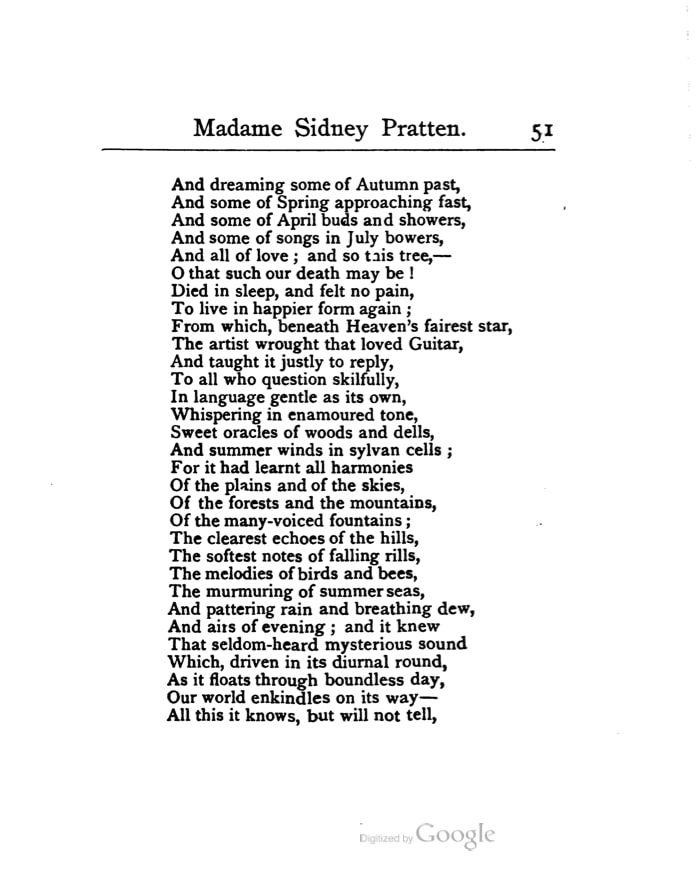 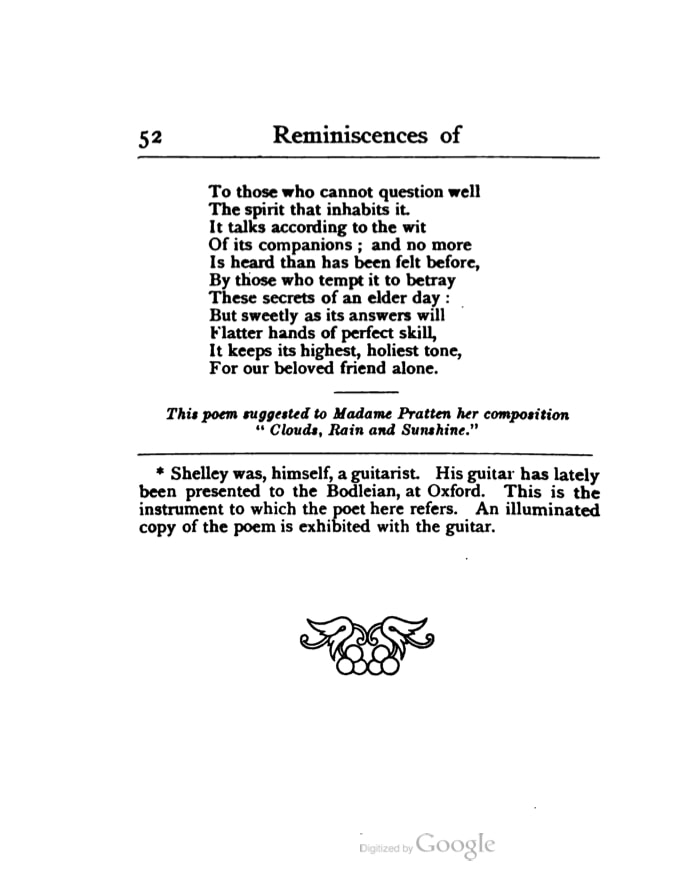 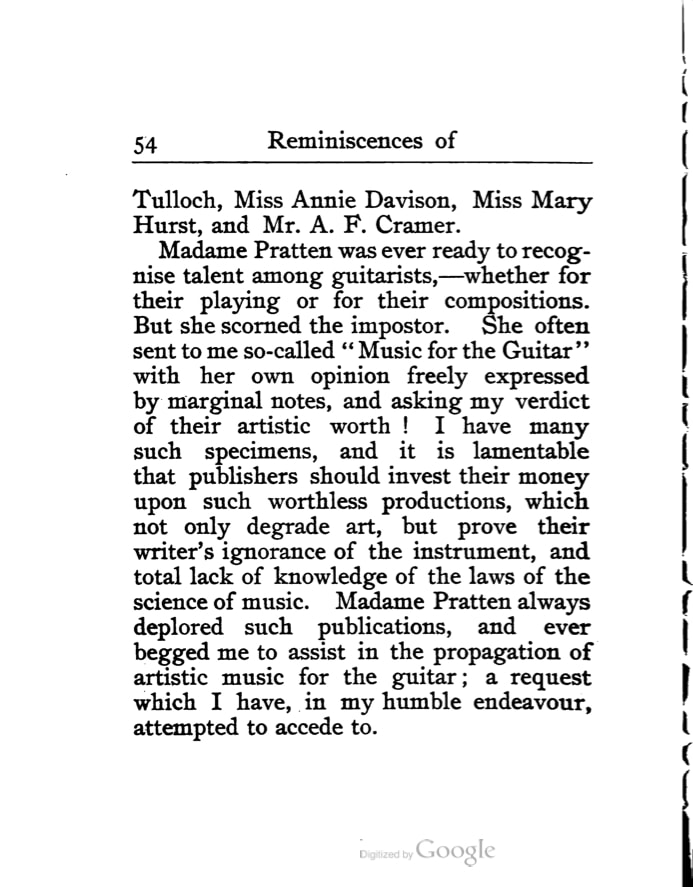 Can you think of any of these impostor pieces from the 19th century? What about from the 20th and 21st centuries? Now I don't like to judge, but unfortunately there is a lot of music out there for guitar that doesn't display much "knowledge of the laws of the science of music". This is music that has been purely contrived on the guitar, for the guitar - music that doesn't give the pupil or performer a chance to plumb the depths of music. This type of music can sell very easily and is often favored by publishers. Luckily though, there does exist a lot of great music out there too! Don't be afraid to use your taste and judgement when it comes to assessing a piece of music.

Below is an exquisite and clever poem written by the author, which ties together many of Pratten's pieces. Unfortunately I have not managed to locate many of these pieces. 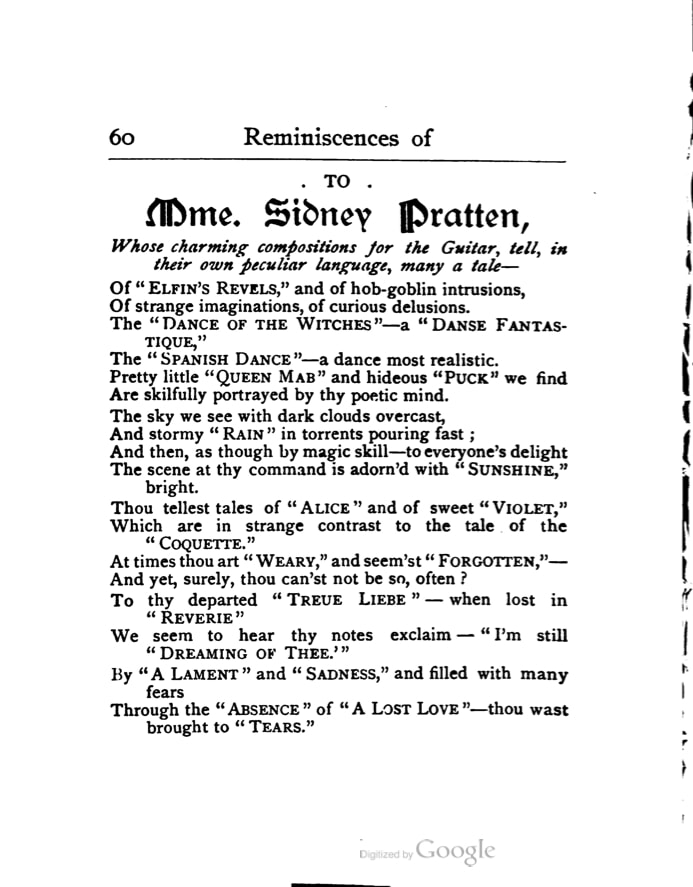 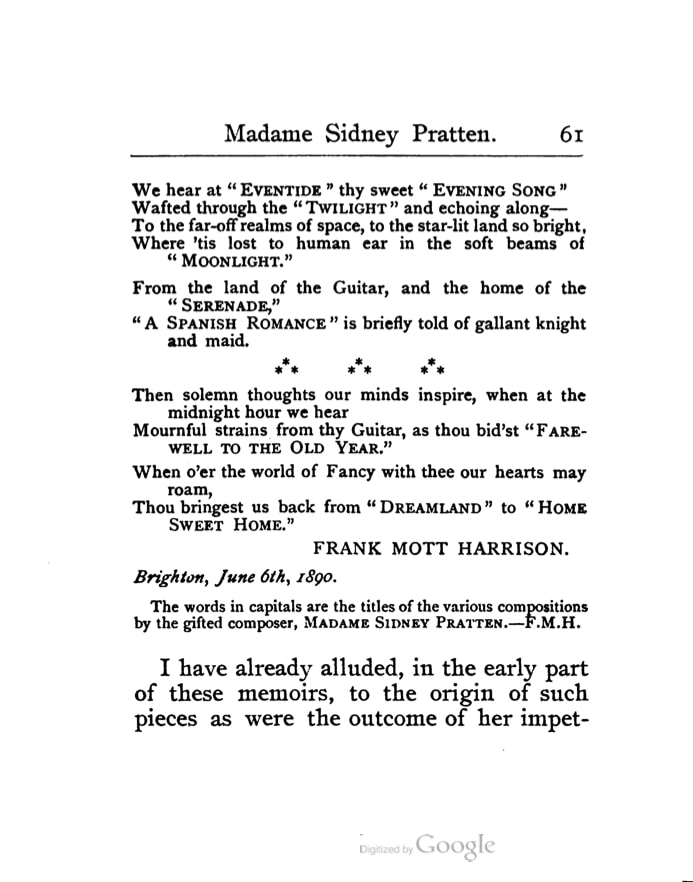 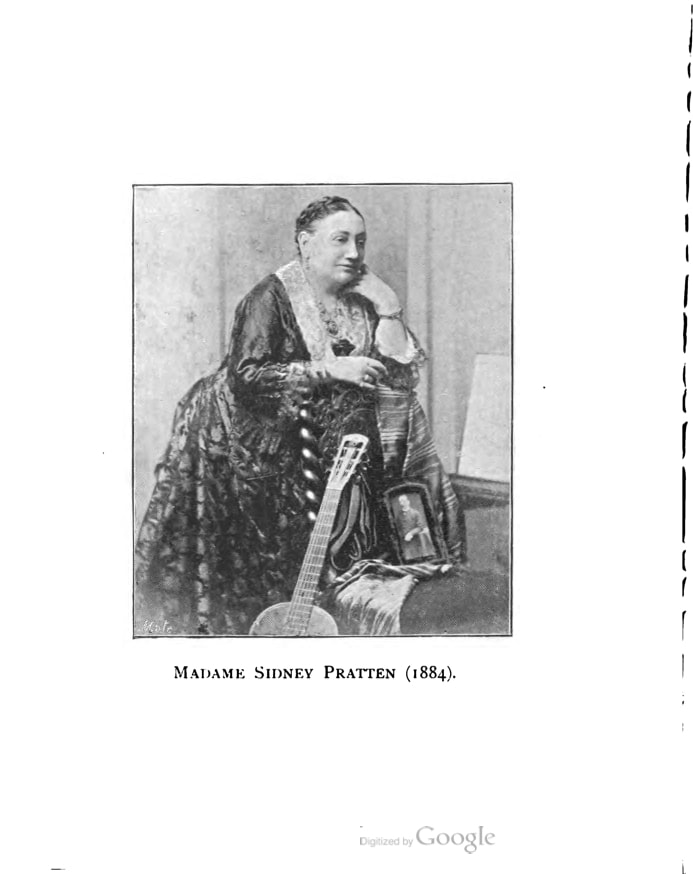 "Madame Pratten's collection included guitars of all sizes and ages by various makers - Panormo, Lacote, and others. Some of her instruments were of great interest as having belonged to Sor, Regondi, and other eminent artistes. One guitar, by Lacote, made for Ferdinand Sor, was a very fine specimen of workmanship."

"Madame Pratten's pupils would have formed a formidable army if seen in rank and file. At her death she had instructed some 2,000 devotees to the guitar, among whom were a large percentage of our titled ladies - and not a few of the sterner sex."
Chapter 7

Her inspirations
"I simply take up my guitar and out of the tips of my fingers tumble out the sounds on the strings... and then I play it over and over again until my brain retains it; then sketch it down... Then I leave it, and return to it and put it 'ship-shape'. Then, with my 'little bricks' collected, I biuld up a romance or a story. 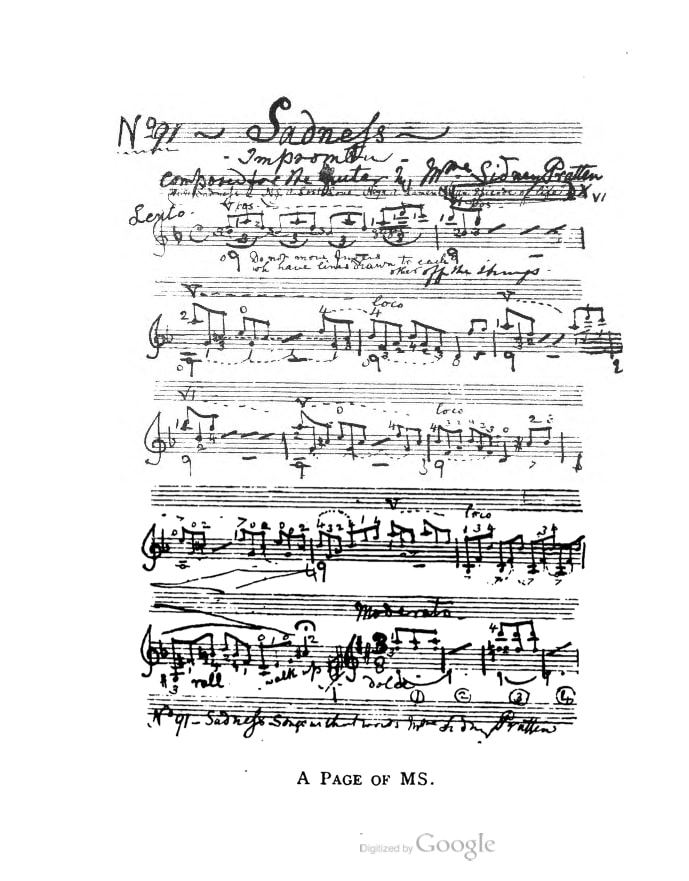