DANIEL NISTICO
Private Lessons
Are you tired of wasting time when you practice?
- You spend days, weeks and months practicing a piece and it just doesn't improve much
- When you play in front of people your memory goes, difficult bits fall apart and unexpected errors creep in
- You wish you could understand the music better so that you weren't just 'playing notes'

Imagine what it would feel like if after each practice you made amazing progress
- You could memorize pieces very quickly
- Your performances would be better than when you practiced at home
- You could drastically improve your understanding of music
After giving hundreds of live performances, playing for examinations, competitions and live radio, I know how important good practice can be.

Many guitarists get into a cycle of bad practice habits. The fact is that practice doesn't make perfect. Creative and amazing practice makes perfect!

If you don't change your practicing habits and mindsets, then you will make very slow, or maybe even little to no progress! It is possible to practice and make your errors and memory even worse than when you began. I don't want you to suffer through that and think that the guitar is just too difficult.

Once you start practicing with new and creative mindsets then you will no longer be greatly disappointed at your playing. You will come home after playing for people, or after an exam, and your insides will be glowing with joy. You won't want to ever stop playing for people, and your skills on the guitar will just keep on getting better by the day.

These special practice methods are not easy to find. Google 'practicing guitar' and you'll get information that is often unreliable and even dangerous if you really want to improve your playing. You could trove through books and eventually find this information for yourself, but that takes many years - I've done that work for you. Your teacher probably doesn't often talk about practice methods because you're spending so much time fixing problems in your lessons.

I'd like to reveal one crucial part of this special practice mindset and it may surprise you: you have a huge amount of creativity and imagination, and when you apply that to your practice you will learn tons each time you pick up the guitar. I've had students learn about harmony, counterpoint, form, rhythm, memorization tactics and practice strategies in a matter of weeks just by simply getting them to use their own creativity and imagination. They end up with pages and pages of their own unique exercises, written down by them in moments of creative excitement!

You don't have to play through pages and pages of boring exercises written by other people. You can create your own and also learn about the intricacies of technique and music by doing so.

You won't make those huge leaps you're craving for unless you change your practice habits and mindsets. Don't waste any more time and make these changes now. Take lessons with me and I will give your practice the makeover you've been waiting for. I would love to help you on this journey.
Testimonials
"Daniel was the first teacher I had that showed me how to become a true musician. His manner of teaching was clear, concise, and natural. This ease of communicating bridged the gap between theoretical concepts and the guitar, therefore allowing me not only to understand the concepts on a deeper level, but utilize them to create richer music."
--- Collin, Eastman School of Music guitar major

"Daniel is very knowledgable about music from all periods. He's also very thoughtful in his criticism and is fun to work with in general."
--- Taro, Eastman School of Music guitar major

"Daniel's continually helped me to be a more musical musician on and off the guitar. His aptitude for analysing a players technique and prescribing the appropriate repertoire that caters to the wants of the individual whilst developing them is rare indeed. Daniel's more than a guitar teacher he's a technician, under his guidance my tone, time, technique and more have improved so, so very much."
--- Jeremy, Melbourne Polytechnic, guitar major

"I learned with Daniel at the Eastman School of Music for a whole year. During this time we went through the basics for classical guitar and we also did a few Sor studies. It was a very pleasant experience and I learned a lot."
--- Mohan, University of Rochester, non-music major
Pricing
Please feel free to contact me with any questions here or at danielnisticoguitarist@gmail.com
Meet your instructor 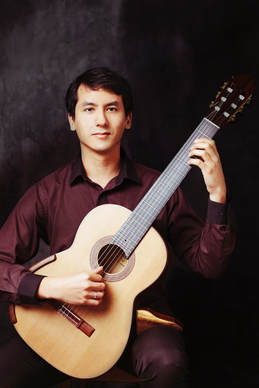 Daniel was first attracted to the guitar by its mysterious resonances and beautiful tone colours. To this day, Daniel strives to communicate those qualities to listeners with a command of the instrument that is world-class. He has captivated audiences in Chile, Serbia, New Zealand, China, the USA, and the Czech Republic. Daniel has won prizes at national and international competitions, including the Lions Club Global Youth Music Competition and The World Competition.

Daniel has performed at prestigious venues across Australia including ABC’s Iwaki Auditorium, Arts Centre Melbourne, High Court of Australia and Brisbane City Hall. He was broadcast on ABC Classic FM’s ‘Rising Stars’ segment (hosted by Graham Abbott) and has also been featured on 3MBS Fine Music Radio and SBS Radio.

Daniel recently completed a Doctor of Musical Arts degree (abd) at the Eastman School of Music, one of the USA’s leading music institutions. There he studied with Nicholas Goluses and Grammy-award winning artist Paul O’Dette, one of the world’s leading early music specialists. Daniel was the first guitarist in the school’s 94 year history to be nominated for an Artist Certificate award, which acknowledges performance standards of the highest quality. Daniel completed his Master of Music at the Melbourne Conservatorium of Music, and received his Bachelor of Music with Honours from the Victorian College of the Arts. At both institutions he studied with Aria-award winning guitarist Tonié Field and internationally renowned pianist Dr. Donna Coleman.

Daniel began playing guitar at age 12, first taught by his father. His passion quickly grew and he attended the Australian National Academy of Music (ANAM) Young Academy, where he performed regularly and received masterclasses. During this time, Daniel studied with Susan Ellis (student of Sadie Bishop, who was a pupil of Andrés Segovia). Training at the Victorian College of the Arts Secondary School (VCASS) soon followed and here Daniel won the Most Outstanding Soloist Award. During his time at VCASS Daniel studied with Benjamin Dix, a member of the highly acclaimed Melbourne Guitar Quartet.

Daniel’s mission is to broaden the horizons of the classical guitar through performing and teaching. He has written several books on guitar playing that cover aspects including harmony, scales, tremolo and historical performance practice. Fundamental Harmony was his first book, and in it Daniel combines quotes and paintings to vividly evoke a mood for each key. Daniel’s debut album, Un Viaje Mistico ... A Mystical Journey, was featured in Soundboard Magazine and Classical Guitar n’ Stuff. The album contains a mix of rare gems and popular guitar classics and was described as “a truly fantastic recording”. Daniel recently released the world-premiere recording of Leonard Schulz’s 12 Etudes and this was highly praised by David Leisner, who was described by American Record Guide as “among the finest guitarists of all time”. Daniel continues to perform, record and promote previously unknown classical guitar music through his blog, The Resourceful Guitarist.