Many people often wonder what the purposes of practicing scales are.

1) Scales are one of the most fundamental building blocks of music
- Scales are the equivalent of a language's alphabet. Imagine trying to learn how to read without first learning the alphabet!
- Scales can be found everywhere in music on both micro and macro levels

2) Scales help you learn the notes on the fretboard very quickly
- Phrases often fall within the range of a scale (C D E F G A B C for example). Thus they often center around one position on the fretboard, derived from a scale.
- Knowing scales in different positions can help you quickly change positions and keep your bearings

For now I want to focus mostly on the last point, the musical benefits of practicing scales, which is perhaps the most overlooked.
Bursts
Looking at scale passages within pieces of music, you will often see that they occur in bursts. This means that the scales will appear in fast rhythms for short durations of time. One popular example is from Tarrega's 'Capricho Arabe'.

Mertz was probably aware of this tendency for scales to appear in bursts, as his scales are presented with a burst rhythm.

Compare this to Segovia's Scales, which are presented in uniform rhythm.

Can you find any burst scales in the pieces you're playing? If so, leave a comment below and let me know so we can keep a database of them!
Dynamics
How often do you methodically practice dynamics?

Looking back to 19th century sources, we can find one musician who suggested practicing dynamics very methodically. And guess what materials this particular musician suggested to use? Scales!

The name of this musician was Carl Czerny and he was one of Beethoven's pupils. Czerny suggested practicing scales as follows -

First:
Practice scales with five different dynamics. This should be done in all degrees of tempi, from Moderato to Prestisissimo.
Second:
Add crescendo and decrescendo

Dynamics should be at your mercy and control. If you don't practice them into your technique, then don't expect them to just magically happen when you want them to!

Czerny also gives some descriptions for each dynamic, saying that each one "expresses some determinate character, and consequently each is capable of producing a particular effect."

Here is Czerny's description of The Pianissimo (pp):
"Indicates the gentlest touching of the (strings), so however, as not to become indistinct or inaudible. It bears the character of secrecy, mystery, and when executed with the utmost perfection, it is capable of producing on the hearer the pleasing effect of music at a great distance, or of an echo."

Try the scale below and make the pp, crescendo, mf, decrescendo and pp as clear as possible

Do you methodically practice different articulations?

Modern musicians often attempt to play everything as legato as possible. But it's pretty clear that 18th and 19th century musicians were not doing this. In fact, up until around the mid 19th century, legato was not the standard articulation but was considered a special effect.

Musicians from past centuries were varying the articulation a lot and it often wasn't indicated in the score.

But sometimes articulations were indicated in the score, such as in this study by Carulli (from his Second Suite a la Methode). Have a go at the example below!

Tone Colour
This is a big one for guitarists, because varying the tone colour is one of the instrument's most powerful expressive devices. But again, is it something we practice methodically?

Just as there are five different degrees of dynamics and articulations, there are also five types of tone colour you can use. These were outlined by Catharina Pratten in her Guitar School.

Try practicing a scale in each of the five plucking regions! 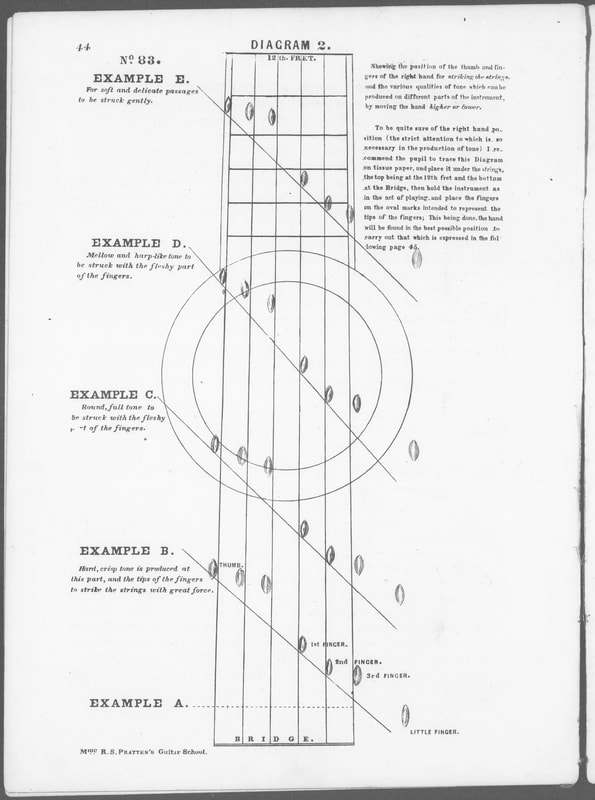 Has this article changed how you think about practicing scales? I'd love to hear from you, so please leave a comment below!
Check out my Ebook for more:
Purchase Here
Learn More

Skype Lessons:
Tired of wasting time when you practice? I can form a routine for you that will ensure you make every minute as productive as possible.
You can also learn how to see music as a language, helping you understand and read it way more effectively.
All you need is a laptop, tablet, or smartphone and a Skype account (free to create).
Contact me and we can set up a free consultation to get you started on your journey to realizing your full potential on the guitar.

"Daniel's thorough knowledge of the guitar is evident and you can tell straight away that he has many years of experience under his sleeve."
--- Alejandro

"Daniel was the first teacher I had that showed me how to become a true musician."
--- Collin

"Daniel's more than a guitar teacher he's a technician, under his guidance my tone, time, technique and more have improved so, so very much."
--- Jeremy