Archive
Felix Horetzky's Instructive Lessons for the Spanish Guitar (1838)
Download Horetzk'y Instructions Here
It's been a little while since I've sent out another method book, so I wanted to quench your thirst today. Horetzky was a wonderful composer who studied with Giuliani (more on that below). I will be recording some of his works in the near future.

Here is some background information about the author and composer, Felix Horetzky (1800 - 1871).

"Felix Horetzky went from Poland to Vienna where he performed with Giuliani and Diabelli and studied with Giuliani. The preface to opus 15 by Horetzky published in London says "I feel therefore that as I was so fortunate as to receive my musical education from so able a Teacher...". He had a successful concertizing and publishing career and spent most of his life in Edinburgh, Scotland.

From P.J.Bone's 'Guitar and Mandolin', courtesy of Rob MacKillop:

"Horetzky, Felix, a Polish guitarist, born in Prague in 1800 and died in Edinburgh in 1871. He is considered one of the best guitarists of Bohemia, and has been erroneously claimed as that nationality. When he was a child he played the guitar, but with no other intent than amusement. His family returned to their native land when he was in his teens, and made their abode in Warsaw. It was here that he took regular instruction in guitar playing and the theory of music, and from the time he was under a teacher, receiving systematic instruction, his interest in the instrument which had only amused him previously, developed into a passion. When fifteen he commenced a career as clerk in the Chamber of Accounts in Warsaw, but his disposition was was too active to be reconciled to this monotonous life. Having become so absorbed in music and the guitar, and his employment proving irksome, he resigned and commenced to teach the guitar. He also continued his musical studies with increased vigour and a few years later visited Vienna. Here he studied the methods and compositions of the foremost Viennese masters, received higher instruction on his instrument from Giuliani, eventually performing in public with him and also with Diabelli. Such was his success and reputation, that he obtained the patronage of the Royal Court, and was appointed guitar instructor to the Archduchess, and several other members of the royal household, before he had been resident in Vienna a year. His restless nature still predominated and not content with his honourable position, undertook a protracted and roving tour of Europe, travelling through Germany, performing in Frankfurt and other important cities, and then Paris. Just previous to 1820, Horetzky visited London and met with his usual success, for his advent occured at a very opportune time - when England had become familiar with the names of the guitar virtuosi who had created such sensations in Vienna, and Horetzki advertised the fact of his arrival from this famed city by announcing himself on his first compositions published in England as 'F. Horetzky, from Vienna'. He toured Great Britain and eventually made his abode in Edinburgh. In this city he met with a favourable reception, was recognised by the musical puplic and patronised by society as the foremost teacher of the guitar in Scotland; his numerous pupils came from afar, and included the most influential and fashionable members of Edinburgh society... His publications for guitar number considerably more than one hundred and fifty, and they wre exceedingly popular with amateur guitarists of Great Britain, for they appealed to average performers by their simplicity and effectiveness: his celebrated Maestoso and Adagio are pearls of classic beauty... Horetzky was the author of various studies and exercises for the guitar and original songs with guitar and he wrote guitar accompaniments to numerous popular vocal compositions. Many of the later were issued in Scotland and dedicated to his pupils and friends there."

*This information was taken from http://www.earlyromanticguitar.com/erg/composers.htm#Horetzky 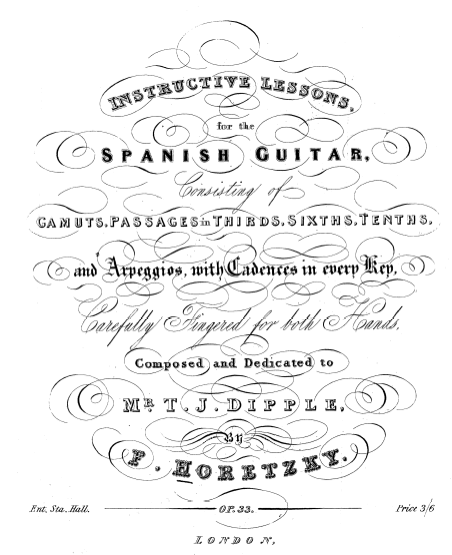 This book is a little different to the previous three method books I've sent, in that it is not a typical fully fleshed method. It's almost more of an appendix, and contains three distinct parts.

Part 1: Short lessons that focus on specific things like arpeggios, and modulations

Part 2: A wonderful array of scale exercises in various keys

Part 3: Cadences in all major and minor keys
Part 1: Short Lessons
The first lesson wastes no time in showing how much of a virtuoso Horetzky must have been. 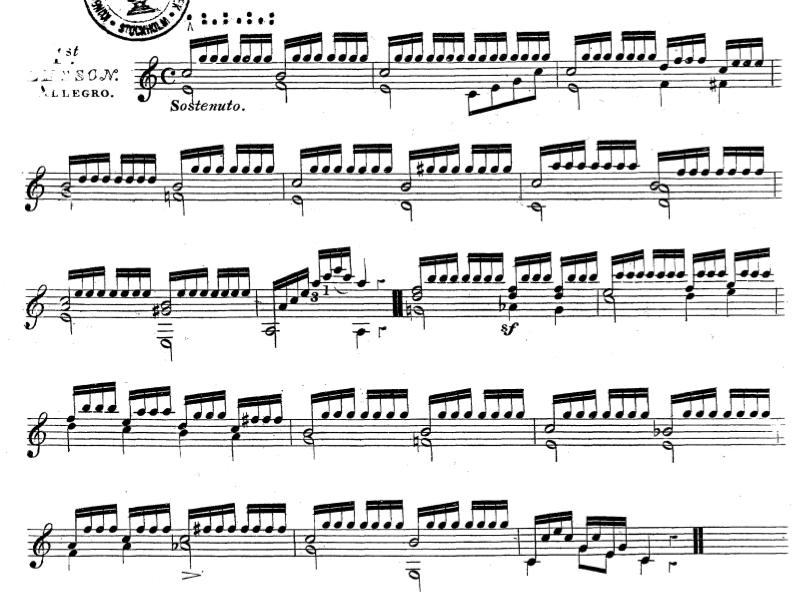 The third lesson modulates through some keys that we rarely encounter in guitar pieces. However, if we practice these and then come across key signatures with many sharps or flats, then we will be prepared!

Part 2: Scales
Each key is presented with the same materials.

First, a scale in contrary motion (I've never before seen this in a method book). It's well worth practicing this, because you will often see this kind of counterpoint in pieces.

Next, we have scale patterns in thirds and sixths. Again, this is very beneficial to practice, as you'll very frequently encounter passages like this in music.

And then follows the same thing, but now in tenths and octaves.

Finally we have scale patterns with various articulations. This is further evidence that suggests 19th century guitarists were constantly varying the articulation in their music, even if it wasn't notated in the score.

Part 3: Cadences
Practice these cadences and you'll be very well prepared for their appearance in pieces. 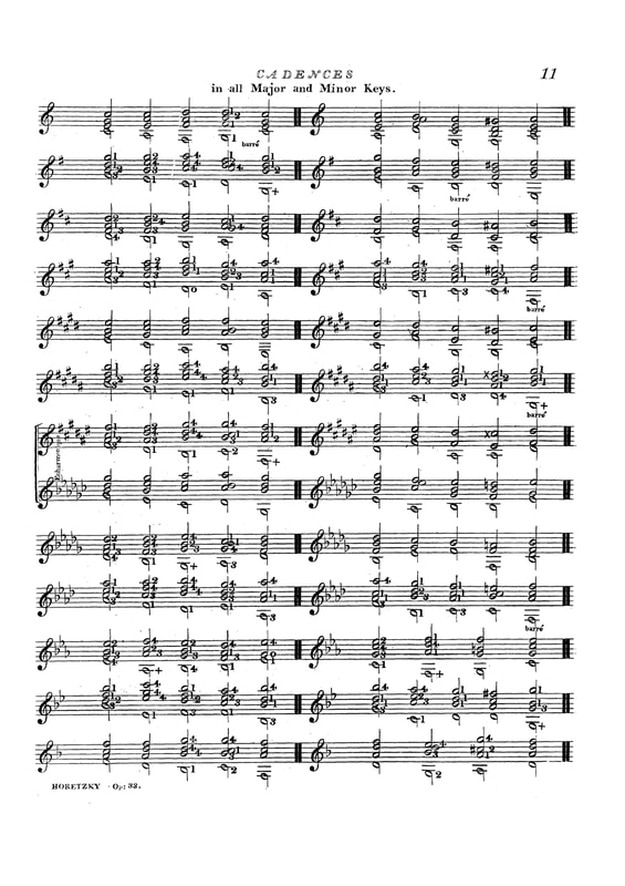