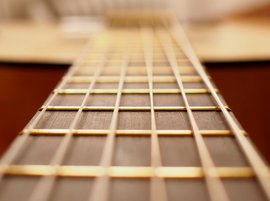 Fun Technical Exercises Using The Rule of the Octave
by Daniel Nistico
19th century guitarists left a treasure trove of resources for us 21st century guitarists to practice and learn from and the Rule of the Octave (ROTO) is just one of them. In this article I want to explore different ways of practicing the ROTO to create new, fun, and challenging exercises that benefit your hands, mind, theory, creativity, improvisation and fretboard knowledge.

In my book Fundamental Harmony, I present the Rule of the Octave on the guitar, which hasn’t been done to my knowledge since around 1842. Basically the ROTO is a method of harmonizing the scale in a way that avoids voice-leading errors, such as parallel 5ths and octaves. It makes for a great tool for composing and improvising, which I will explore in the next article. For now I just want to show you a fun way to get acquainted with the ROTO.

An Abundance of Arpeggios
If you’ve played lots of 19th century guitar pieces, you’ll probably be aware that there are lots of arpeggios in music from this century. Many guitarists of today practice Giuliani’s 120 right hand exercises, but many more exercises exist from both well-known and obscure guitarists.
Giuliani’s right hand exercises are not always the most fun thing to play – admit it! That’s because he presented them in a very methodical layout and probably expected us to be inventive and creative with them, not just to play them as they’re written.

So I want to advocate practicing these right hand exercises by Pratten, Mertz, Kirkman, Carulli, Carcassi, and Giuliani with the Rule of the Octave. Below are some examples of what I mean and I’ve also done a video of them too.
Download all 20 pages of arpeggio exercises by different authors below for a lifetime’s worth of fun!

This is obviously a lot of material to work with, but you can be selective and creative with how you practice this. Bear in mind that the ROTO uses chords of four notes, so not all arpeggio patterns in the worksheet will work.

Notice how arpeggios and their figurations can evoke different moods and grooves.
If you check out Carulli’s exercises on page 6, you’ll notice that he categorizes different arpeggio patterns into groups related by tempo. Carulli is suggesting that certain arpeggio figures are more apt for certain tempi. Perhaps we can apply this thinking to the remaining arpeggio figures in the workout sheet. Perhaps some can work great in many different tempi, while others are only suited for a specific tempo.

You can add all sorts of dynamics, articulations and colors as well. You can also make your own arpeggio patterns, or use patterns found in pieces. Most of all have fun with it - let me know what you think!