Archive
Table of Contents
Just to give you an idea of what this book covers.
A Quick Glance Through Most Chapters
Chapter 1 - Expression
Did musicians from past centuries play with expression? In high school, I was taught that performers didn't start suing dynamics until Beethoven's symphonies. Have you been taught things like that? If you have been reading past resources from this blog, you'll see that it's quite clear that 19th century guitarists were adding lots of expression to their playing - perhaps a lot more than musicians do today!

One of the most powerful things behind Dolmetsch's book is that he presents a lot of information from sources without much of his own input. The book is essentially a survey of sources by various musicians of the 17th and 18th centuries.

In this section, Dolmetsch presents lengthy writings from musicians such as Girolamo Fresobaldi, Thomas Mace, Francois Couperin, and Johann Joachim Quantz. Below is an excerpt from Mace. 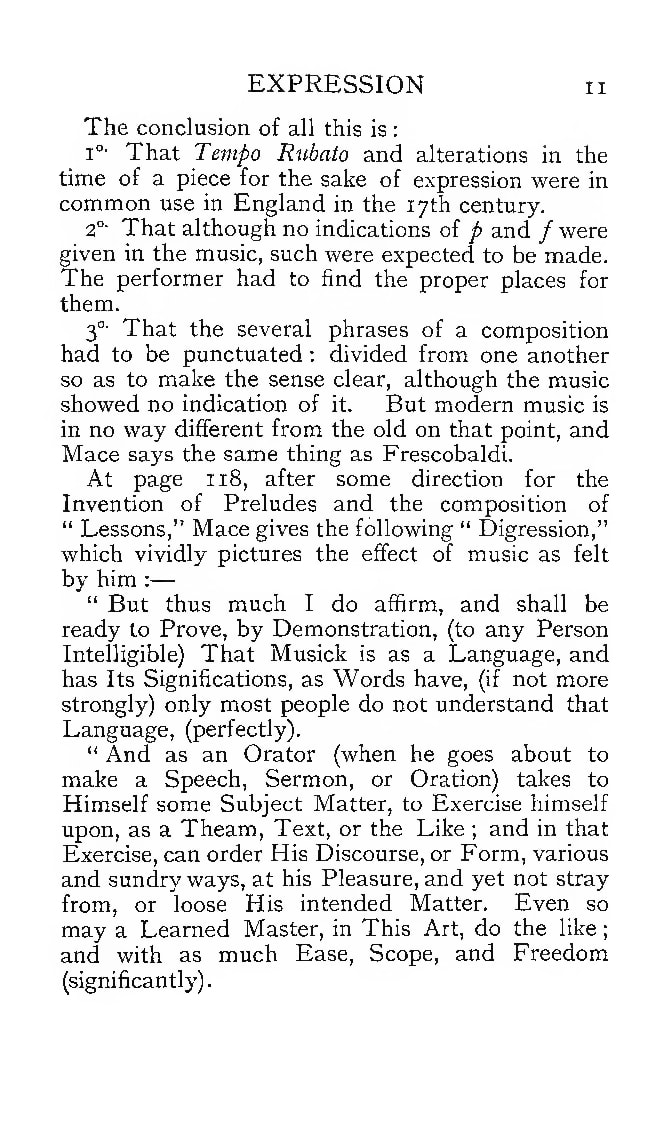 Chapter 2 - Tempo
This section gives some information about how musicians beat time with their hand, what time words meant, and the tempo and character of dance pieces. A quick glance through this section will reveal that these early musicians were super critical and thoughtful about keeping time, with their main concern being the character of the music. Below are some words from Quantz.

"It is pretty well known that when a piece is repeated directly one or more times, specially if it is a quick piece, for example the Allegro of a Concerto or a Symphony, one always plays it the second time a little quicker than the first, so as not to make the auditors fall asleep. If one did not do this, the auditors would not know that the piece has already been finished. If, on the contrary, it is repeated in a slightly quicker tempo, it will get by it a livelier air, new and strange, so to speak ; and this calls fresh attention from the auditor. This practice is not disadvantageous to the pieces, and it is used by good and mediocre players who all find the effect equally good. But, there would be no harm, anyway, if a man in low spirits played, according to his disposition, the pieces a little slower, and a quick man a little quicker, so long as they render the spirit of the music."
Chapter 3 - Conventional Alterations of Rhythm
Couperin wrote that "we write differently from what we play." Notation is often very deceptive, therefore it's wise to know about some of the conventional ways that early musicians altered rhythm. Perhaps the most contentious issue regarding rhythmic alteration is dotted notes. Dotted notes were almost always played quite differently to how they were notated. 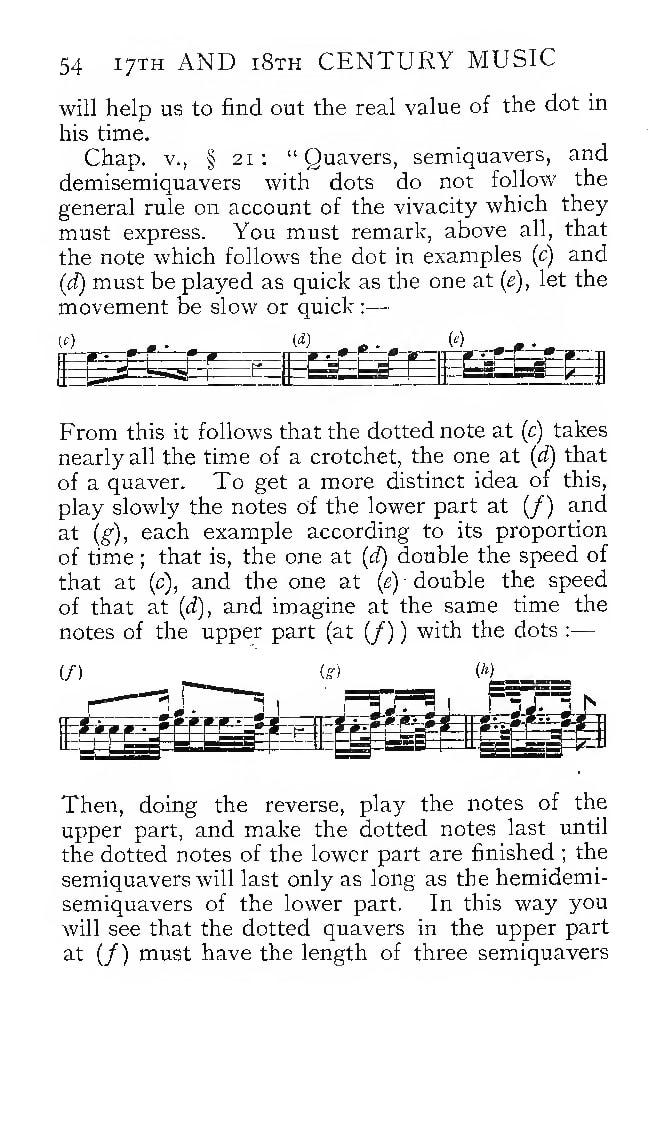 Another common type of alteration was to play notes unequally (a.k.a. inegal). This is very similar to swung rhythms used in jazz. 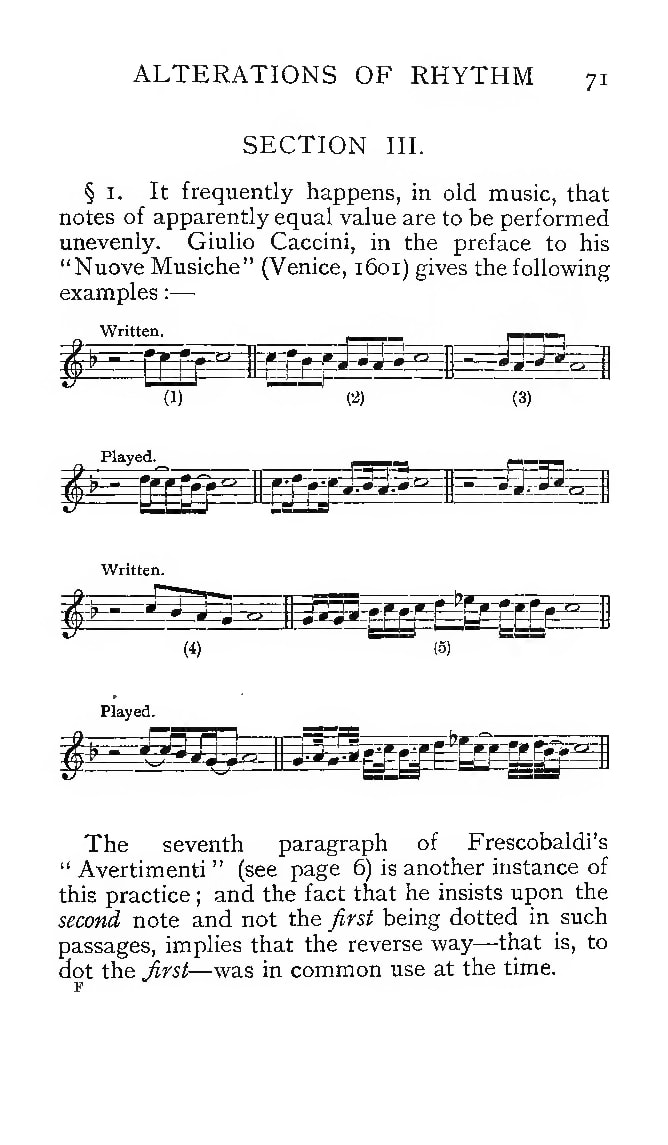 Chapter 4 - Ornamentation
Generally, musicians of the 21st century adhere to whatever ornaments are indicated in the score and very rarely add much more. Information suggests that musicians from past centuries added a lot more ornamentation than we might think. These additions weren't just a random process though, there were fairly specific places that warranted ornaments and fairly specific ways of executing these ornaments. To not be aware of these conventions is just as "heretical" as drastically altering what the composer indicated on the score. Dolmetsch described this nicely in the introduction of the chapter:

"In modern music the ornamentation is practically all incorporated with the text. In the Old Music the ornamentation is sometimes left out altogether, or indicated more or less completely by means of conventional signs. The composer in either case had prepared his music for the ornaments ; if we do not use them we are violating his intentions just as much as if we altered his text. It is not even a question whether we like them or not, or whether they are in or out of fashion ; they form an integral part of the music. To omit them is just as barbarous as taking off the exuberant decoration of flamboyant Gothic architecture under the pretext that one prefers a simpler style. The ornamentation alters the melody, rhythm, and harmony of the music. Its study is, therefore, indispensable."

This chapter is dense and comprises the majority of the book. Below are just a few pages from the start of the section on the appoggiatura. 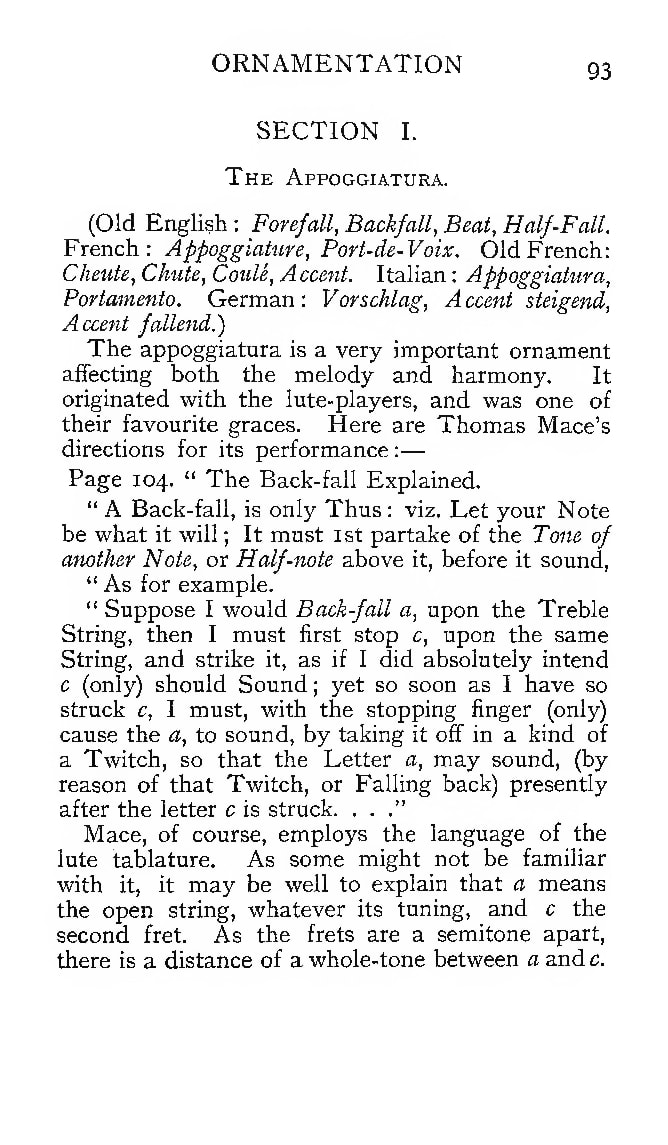 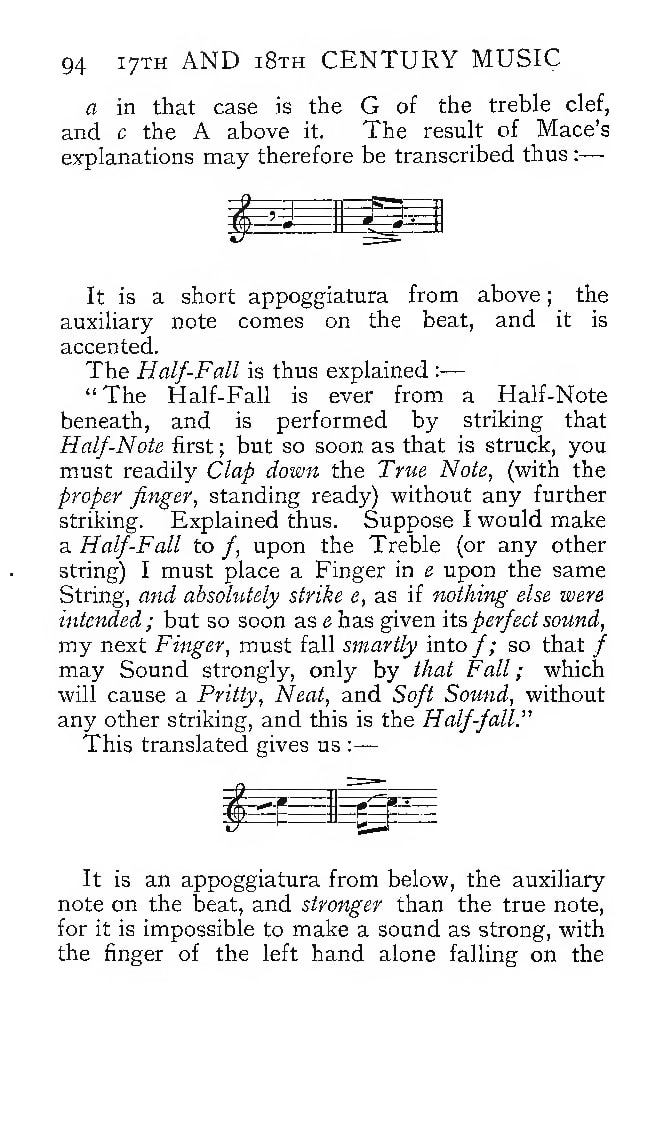 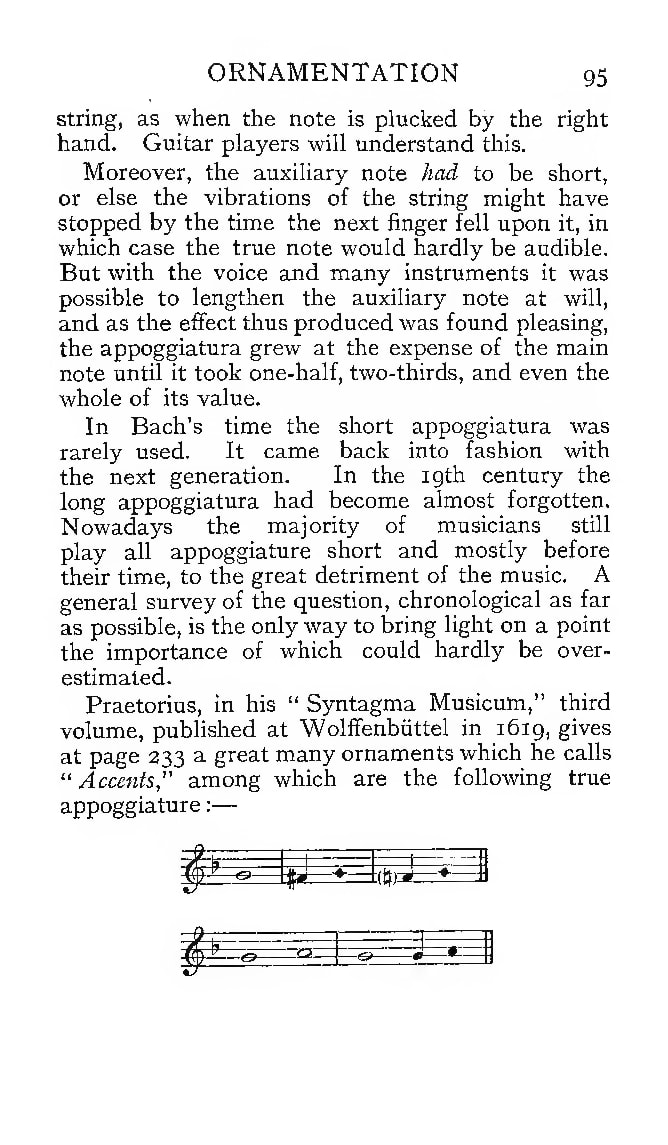