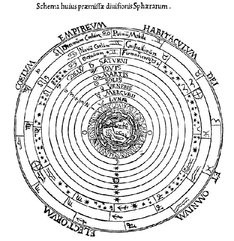 Divide and Conquer: Part 4 – Harmony of the Strings
by Daniel Nistico

“The heavenly bodies are nothing but a continuous song for several voices (perceived by the intellect, not by the ear); a music which... sets landmarks in the immeasurable flow of time. It is therefore, no longer surprising that man, in imitation of his creator, has at last discovered the art of figured song, which was unknown to the ancients. Man wanted to reproduce the continuity of cosmic time... to obtain a sample test of the delight of the Divine Creator in His works, and to partake of his joy by making music in the imitation of God.”
--- Johannes Kepler, Harmony of the Spheres. Book V, Chapter 6

Many medieval philosophers and scientists believed that musical harmony was reflected in the motion of the planets. This eventually culminated in Kepler’s seminal book, Harmony of the Spheres, where Kepler made stark correlations between musical intervals and planetary motions, both represented as ratios.

The Power of Harmony
Now, I’m no scientist or philosopher, and I’m not going to pretend to understand all the sciency details, but I believe we can take something away from this kind of thinking. Musical harmony is clearly a powerful force and has been considered so for a long time.
Therefore I like to think of harmony this way - a force that is able to exert great physical effect on us, akin to the way gravity affects objects. This effect usually results from tension and release, creating a kind of pushing and pulling that could be likened to that of the Moon’s effect on the tides.

The forces of harmony vary by many degrees and shadings, which depend on many variables. These can include key, tonality, dissonance, tessitura, chord type, and chord spacing. Not only does harmony have varying degrees of tension and release, but certain harmonies can also create different moods or atmospheres. It goes even further... Some composers, including Messiaen and Scriabin, were evidently affected with synesthesia and would see pitches and harmonies as colors. Musicians even went so far as to create an ocular organ, which would produce different rays of colors depending on which key was pressed!

Now, rather than attempt to teach harmony, which is a somewhat laborious undertaking, my goal is to get you more involved in its power and sway. I’d like you to be ultra sensitive to the many nuances of tension and release and all the different palettes of mood, atmosphere and color.

Fundamental Harmony
I recently completed a book that attempts to begin this process. I carefully selected quotes from theorists and composers who described the character of each key in detail. I then matched those with exquisite paintings, which I spent a long time searching for.

The book only contains keys that are commonly found in the guitar’s literature. There aren’t many pieces in Db major for example, so why bother learning that key in depth!?

Each key contains three exercises. The first simply presents the tonic triad in closed position (i.e. with the notes stacked as closely together as possible). The second presents the tonic triad in open position (i.e. notes stacked farther apart.). Both of these exercises see the triad move up and down the fretboard, right down from the first position, way up to the tenth.

The Rule of the Octave - A Harmonized Scale
The third exercise is quite a special and unique one. It’s essentially a harmonized scale. If you play the bass line you’ll notice that it’s simply a scale that ascends and descends. The scale is harmonized in a way to make it free from voice leading errors, such as parallel octaves and fifths.

In the 18th century, this was called the Rule of the Octave and was an important compositional and theoretical tool of the time.
It was included in a guitar method book from the late 19th century, just one of the many gems of information I’ve discovered in researching books from this period.

The Significance of Harmony
I can say that after examining many guitar method books from the 19th century, harmony was the most important and most heavily discussed topic of all.

There are sometimes entire books devoted only to learning certain harmonic exercises - cadences, modulations and arpeggios for example.
This kind of pedagogy is not so strong today, unfortunately. I want to change this trend and revive the lost art of learning harmony in depth.
Knowing fundamental harmony should be second nature for guitarists, just as it is for pianists. Pianists are usually required to transpose their etudes and play cadences and chord progressions in every key!

It’s so important to devote time to harmony, because it makes learning music much faster and deepens our understanding of the music dramatically. It also gives us tools for improvisation and composition.
Fundamental Harmony