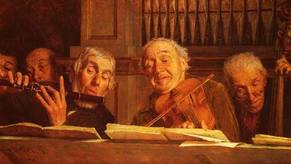 Divide and Conquer: Part 2 – Orchestrating the parts
by Daniel Nistico

One of the greatest composers of all time said, “the guitar is a miniature orchestra in itself.” That composer was Beethoven. Beethoven is considered to be one of the greatest symphonists of all time, meaning that this quote is no mere triviality or generality. Beethoven must have heard actual orchestration in the guitar. I’d love to know which guitarist Beethoven heard to spark such a quote; my guess is that it was probably his friend and colleague Mauro Giuliani.

I want to talk about how you can start to orchestrate your music, so that you learn it faster and communicate a deeper musical vision of the piece. This is another form of dividing and conquering and should be used in conjunction with Part 1.

Think Like an Orchestra
What’s the first thing you think of when you see the word ‘orchestra’? A whole bunch of different instruments playing one piece of music together, right?

You might have even had some experience playing in a guitar orchestra. What did that entail?

- You had your own part that you had to learn, then once a week or so you would rehearse with the rest of the orchestra.
- During this rehearsal, the wonderful conductor would probably spend a lot of time working on different sections of the orchestra (guitar 1 + guitar 2 / guitar 3 + guitar 4, etc.)
- The conductor would probably also rehearse each part individually, getting the full musical potential out of each part.

Practice Like an Orchestra
- Members of an orchestra practice their individual parts in great detail (fingerings, bowings, toungings, dynamics, rhythm, articulation etc.) and then rehearse together just a few times before a concert.

- The conductor would very often practice sectionals (flute + cello, harp + violins, etc.) and also individual parts to get the maximum musical potential out of them.

See the pattern here? Members of an orchestra practice their individual parts first and then rehearse together. During these rehearsals, sectionals would often take place. In addition, certain individual parts would be rehearsed on their own to get the maximum musicality out of just one part/instrument group.

Now think to yourself, do you approach your practice in a similar way?
If you don’t, then you are like an orchestra whose individual members have not practiced their parts and haven’t done their sectionals.

So how can you start practicing like an orchestra so that you can sound like an orchestra?
The first thing you need to do is to figure out which notes belong to which parts. This isn’t always easy and is a skill that takes time and experience to get better at.

The Obstacles of Notation
One of the major obstacles for figuring out how to orchestrate your music is notation. The guitar especially has this problem.
The music is notated onto just one clef! Think about that, we are often playing two, three, four or more parts at once and it’s all notated onto one clef. That’s madness!

But we can’t have different clefs for each different part, otherwise we’d go insane.  Composers are very well aware of this problem and so they often use two subtle notational devices to give us clues as to how the parts are distributed:
Let’s look at an example by Sor, his popular Etude in C Major (no. 1 from the Segovia collection)

Look closely at the beaming and the note values. There are two places of notable interest -
Just look at that detail in the beaming! Each note has its own beam. Why would anyone go to the trouble of beaming the middle voice like that, it’s darn messy! There are also two different note values given on the same beat (two minims and one crotchet), what’s that about? Maybe Sor is trying to tell us something…

What he's trying to tell us is that there are three different voices in this etude; like different instruments of an orchestra, or different voices of a choir. So for convenience’s sake, I’ve written out each individual voice in full.

You can download the full parts and watch a video of me playing below.

Here is an excerpt of the first four measures, which breaks those measures down into the three constituent voices.
Go ahead and play each one right now - try and play each voice as though it were your part in an orchestra!

Guitar 3
Here are some things you can experiment with to get a lot of musical expression out of each individual part.
Remember to make each part sparkle by practicing in small units and memorizing. Because you’ve simplified the music drastically and are practicing in small units, you should now be able to inject your full imagination and awareness into your music making.
That means things like easy and expressive fingerings, wild rubato, wicked vibrato, extreme timbre contrasts and shapely dynamics.

Golden Takeaway: The shaping and expression you give to each individual part will create the illusion of a miniature orchestra when the parts are combined.

If the piece you’re working on is comprised of three voices, then there are only three possible combinations, or sectionals to choose from.
The sectionals for Sor’s etude are all notated on the downloadable sheet below.


This practice technique can be applied to virtually any piece of music.

The notational clues mentioned above are only one small part of the thought process. They can sometimes be misleading due to errors on the part of the editor or composer.

Parts can come in and drop out
Another thing to bear in mind is that the number of voices are not always consistently maintained on the guitar, due to the instrument’s limited availability of notes at one given time. Sometimes voices drop in and out, so that for whole phrases there might be three voices and for other phrases there might just be two. Bach’s music especially comes to mind in relation to this. Voices very frequently drop in and out and this is what can make his music so thorny.

Sor’s Etude no. 01 is a beautiful example of a guitar piece with three voices being consistently maintained for its entire duration.

Some Extra Ways to Help
- Listening to music of the style (for example a Mozart symphony if you're playing Sor)
- Playing ensemble music can help a lot in making the thought process easier and logical.
- A healthy knowledge of harmony and counterpoint can also be helpful.
RECAP: So your practice schedule should look roughly something like this:
45-Minute Practice System:
Use a timer. No distractions. Reward yourself at the end.

First 15 Minutes: Fundamentals
TONE, RHYTHM & DYNAMICS on the open first string
(You can also apply this stuff to scales, arpeggios, etc. if you want to. More on that to come in future emails)

Remaining 30 Minutes: Divide and Conquer
FORM AND STRUCTURE: Segment the piece into small units of 1-4 measures. Memorize them and make them sparkle.
ORCHESTRATE THE PARTS: Separate each voice and practice them individually as though they were your parts for an orchestra. Once each part makes sense and sparkles, then do sectionals and combine the various parts. ​