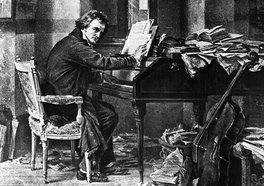 I hope by now that you’ve had some acquaintance with the ROTO. At the bottom of each page of my book Fundamental Harmony, you’ll find what is essentially a harmonized scale. This harmonized scale that traverses an octave was called the Rule of the Octave, and was very popular in the 18th and 19th centuries as both a compositional and improvisational tool.

Unlike today, composers of the 18th & 19th centuries were more often than not performers and improvisers also. They were fluent in the language of music to the extent where they could improvise a complete piece of music, or compose pieces very quickly.

One tool that they had at their disposal for composing and improvising was the ROTO. In this article I’ll briefly explain the principles behind the ROTO, and then look at how you can compose or improvise a short piece using it. The examples will be in C major, though you can choose any key you wish if you want to do the composition exercise for yourself.

Below is the C major ROTO. Now, keep in mind that there were many variations of the ROTO in use throughout the 18th and 19th centuries (i.e. using different chords and inversions). The ROTO that I used in Fundamental Harmony was taken from a guitar method by Mrs. Joseph (Louisa) Kirkman, which was published around 1842.

General Guidelines of the ROTO
Here is the most basic way that the ROTO was constructed. The following guidelines apply to the ROTO in both major and minor.
​
1. Each scale degree was assigned as either being stable or unstable, resulting in the type of chord that each note was harmonized with.
Yellow represents the stable scale degrees. These are the notes of repose and relaxation. Purple represents the unstable scale degrees. These are the notes of movement and tension.

3. Unstable scale degrees usually receive a chord of inversion (6/3, 6/4, etc). These will also often include seventh chords to maximize the tension.
​Example: in C major, scale degree 2 (D) receives a V-6/4 chord (G dominant 7th in second inversion). Play that chord and note the tension created from the tritone on top (B-F).

​Note the exception of the sixth note’s harmonization (on A). In this case it’s a root position A minor 7th chord (A-C-E-G), minus the 5th (E).

4. The harmonization is different when the scale descends
Extra dissonances were often added to the unstable notes that precede the stable ones, especially 6 descending to 5 (A down to G). Notice the raised 4th (F#), which adds greater tension before landing on a chord of much greater stability –

​When descending, the chord preceding the third scale degree (in this case F) is often harmonized with a very colourful 4/2 (seventh chord in third inversion). Again, we see this in Kirkman’s ROTO –

Information for this section was taken from: http://faculty-web.at.northwestern.edu/music/gjerdingen/partimenti/aboutParti/ruleOfTheOctave.htm
The ROTO as a compositional/improvisational tool
Now for a more practical side to the ROTO. I will give a basic step-by-step guide for using the ROTO as a tool for composing or improvising. A video is below if you'd like to hear the examples.
Step 1: Create a bass line in your chosen key (I chose C Major).

Step 2: Harmonise that bass line with the chords found in the ROTO.
​Remember that if the line is descending, the harmonisation is different to when it is ascending. Please refer to the C Major ROTO example for the fingerings. Once the ROTO is fluent in your fingers, you will no longer need to rely on fingerings.

Step 3: Flesh out the chord progression.
So now that you have a lovely chord progression derived from the ROTO, it is quite easy to ‘flesh it out’ and create a short etude or prelude. This is very much in line with the compositional practices of 18th and 19th century composers.
​
Here are four different ways that I’ve fleshed out the chord progression, but note that the fourth one is a variation of the third. The figurations and rhythmic structure came about through improvisation. I then quickly refined some spots here and there and ended up with these examples. ​You can also use the quotes that describe each key’s mood and character to help inspire you to produce material to work with.

So Many Possibilities
Keep in mind that you could improvise and/or compose hundreds, if not thousands of phrases derived from the original chord progression. This is one way that composers were able to produce so much material through relatively limited resources. Think of it like a chess player who builds up a repertoire of moves, which over time become habitual, instinctive and intuitive. They would also have many options and be very well aware of the consequence that each option would result in. Great composers are usually like this. They are acutely aware of the possibilities and can take us by surprise by delaying or averting the norms, just like how a great chess player can create a checkmate scenario in a flash!

I’ve created a worksheet (available below) with all the examples put together.
Step 3 is certainly the most difficult part, especially if you haven’t had much experience improvising or composing. Some knowledge and understanding of other musical elements, like form and counterpoint, can help a lot – more of that will come in future articles.
But the most important thing is to be creative, to experiment and have fun!

The ROTO Will Help You Learn Music
Again, I have not provided the fingerings for any of the examples, you should be able to derive them from the ROTO. This is another advantage of learning ‘formulas’ like the ROTO. The principles behind the ROTO are frequently embedded into music, meaning that you will start to see these patterns emerge when you study the music you’re playing. It could be compared again to a chess master, who doesn’t see the board as a step-by-step sequence of movements to win the game, but instead sees very large movement patterns that provide a fluent and powerful language for adapting to any given situation.

​When I play chess, I am that guy who is thinking one step at a time, and I get totally flabbergasted when my opponent has fulfilled their grand scheme and I'm suddenly in checkmate. But when I read music, I don't read it note by note, instead I (try to!) see much larger patterns and can often predict and anticipate what comes next. That's because I was fortunate to have been taught the value of seeing music in larger units, and I hope that I can pass some of this down to you! I also spent many years collecting resources to help with this, including things like scales in 3rds, 6ths, 10ths and octaves, cadence patterns, arpeggios, counterpoint exercises, and of course the ROTO - these are what I like to call the building blocks of music.

I would really love to see your compositions from doing this process, so please send them my way! I can also help you out with any of the steps, just let me know. Leave a comment below!