Compose a piece you love

When I ask classical guitarists why they don’t compose, I often hear things like:


- “Why would I compose something when there are already so many great pieces to play?”

- “I’m scared of composing because my music will sound terrible”


- “I want to compose, but there’s no clear process that I can follow”

Maybe you’ve tried composing before... and didn't get very far?

That used to be me. Until I discovered a simple method that I now use and also use with my students.

Using this method, I've worked with guitarists who’ve never composed before and they create something truly astounding - pieces like this:
Imagine how it feels for me to know that there is all this potential creativity in you that is not being freed.

How much richer and more varied could your repertoire be with your own pieces added to it?

Can you imagine people's reactions after you play something and tell them that you composed it...

I see guitarists put so much effort into their practice and music theory, but it so often goes to waste.

• They often practice pieces that lack substance or have been played to death by every other guitar player.

• They learn theory that has no relevance or application to anything.

• There’s no connection between what the fingers are playing and the music they’re making.
Composing is the best way to learn about the language of music, because you put everything you know into practice
It wasn't until many years after first starting to learn guitar that I was assigned the task of composing something.

That day totally changed my musical life, as it gave me a taste of what composing easily can be like.

It made me realize that you don’t need to be a “trained composer” to compose something decent.

You can hear the piece I composed for this class below. Can you guess which composer it was inspired by?
If you want to experience the joy and excitement of composing and playing your own piece, all you need to do is decide.

You don’t need to wait for someday when you are more "prepared" than you are now.

Instead, you can work with what you have now and make the most of it.

If you can play something on the guitar, you are ready right now to compose.
The longer you wait to get started, the more you'll miss out on.

It's like investing and compound interest. The sooner you start, the more your investment will grow.

A Piece to Call Your Own, the course that gives classical guitarists a clear and easy-to-follow process for composing, only accepts 1-2 students each month, and is strictly one-on-one guidance.

It’s the only course for classical guitarists that actually leads to you having a fully completed piece of your own.

While the course only began at the start of 2019, it has already helped guitarists from all around the world compose music they’re proud of calling their own.

If you’ve ever wanted to compose, I can show you how.

It works even if you have no idea where to start, or have never composed before. Plus you don't have to worry about all the tedious details like formatting, editing and so on, because that's done by me :-)
A Piece Composed in One Day?!
A few years ago on a hot summer's evening, I composed a piece in one day using the process that I teach in A Piece to Call Your Own. It’s something that I still love to play through all these years later.


Yes, it seems crazy and almost hard to believe that it's possible to compose so fast!

In my early days of playing, I couldn’t imagine composing something I'd be proud of in a year, let alone in a day.

But what’s even more thought provoking is that it didn’t happen by chance, plus this same process can be used over and over again.

Below is the piece I wrote in one day that was inpisred by one of Tedesco's Appunti. (Secret: that inspiration enabled me to compose this piece in one day.) 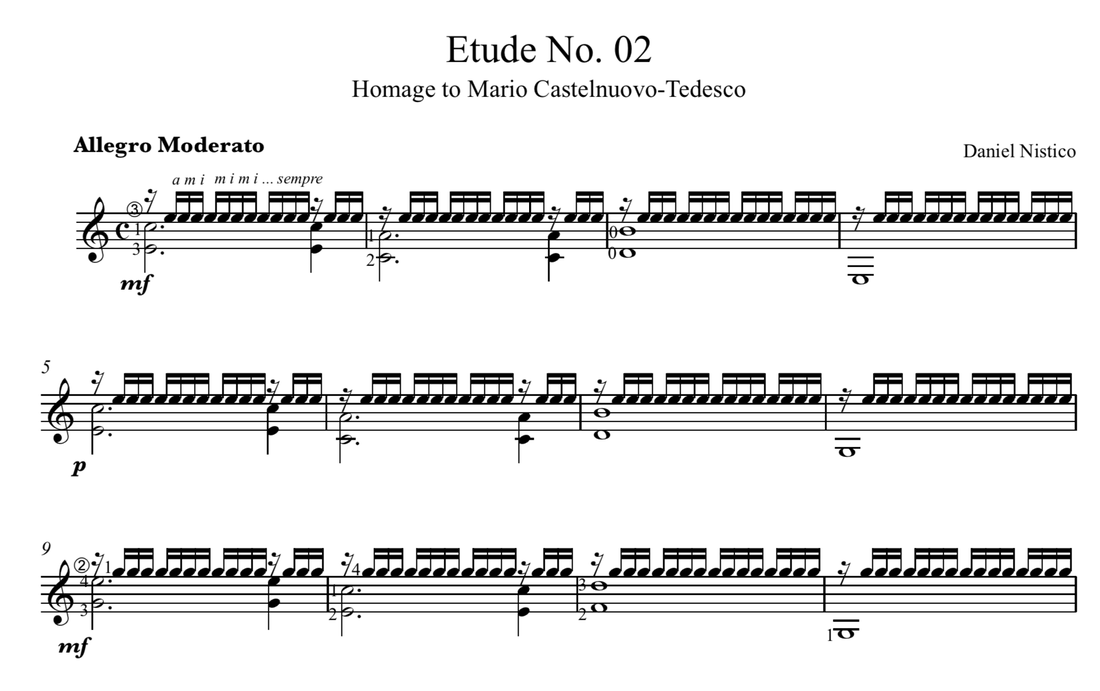 I soon wondered how well this process could work with other guitarists. So I tested it with students of different ages, skill levels, countries…. all kinds of people!
Guitar Teacher: Michael
Michael runs the Fox Chase Music School in Philadelphia, PA and has many young students under his wing that play various instruments. Michael loves music, especially the theoretical side of it. His composition displays a unique and sensitive voice.